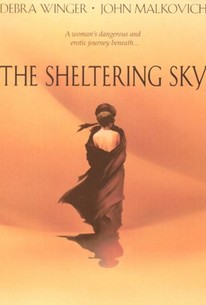 Critics Consensus: The Sheltering Sky puts its talented stars at odds with a misguided and largely unsatisfying adaptation of potentially unfilmable source material.

Critics Consensus: The Sheltering Sky puts its talented stars at odds with a misguided and largely unsatisfying adaptation of potentially unfilmable source material.

Critic Consensus: The Sheltering Sky puts its talented stars at odds with a misguided and largely unsatisfying adaptation of potentially unfilmable source material.

From director Bernardo Bertolucci, The Sheltering Sky is a filmed adaptation of the novel of the same name by Paul Bowles. Debra Winger and John Malkovich star as Kit and Port Moresby, a married American couple who globetrot to North Africa in the late '40s with the hopes of re-sparking their love and adding some zest to their lackluster lives. Along for the ride is the pair's friend George Tunner (Campbell Scott), who soon begins having an affair with Kit. As they struggle through the numbing heat of Africa amidst the sudden love triangle, each of the trio sees his and her beliefs and lives challenged. The Sheltering Sky earned a Best Director nomination for Bertolucci at the 1991 Golden Globe Awards.

Paul Bowles
as Narrator
View All

Critic Reviews for The Sheltering Sky

Those who haven't read the book will be left bewildered.

As you'd expect, it's a big, handsome film, rich and strange in psychological depths and eroticism. Malkovich and Winger play woundingly well.

The book is so complete, so deep and so self-contained that it shuts the movie out. Bertolucci shows us the outsides and the surfaces, and a person seeing this movie without having read the book might ask what it is about.

Working with legendary cinematographer and longtime collaborator Vittorio Storaro, Bertolucci constructed one of the most visually gorgeous films of his career.

Brimming with obscure meaning and devoid of drive and fervor, the film dries up in that symbolic desert sun, the victim of its own pretensions and a casualty of trying to film something best suited to the realm of cult literature.

Bertolucci's grand desert epic gets stuck in the sand right at the start.

Audience Reviews for The Sheltering Sky

I would feel like I was overlooking some considerable flaws if I called this movie perfect, but I am perfectly okay with saying that I loved it. Bertolucci's direction is as powerful as ever, controlling tone and atmosphere with the precision we expect from him. This is among his most visually beautiful work, with Vittorio Storaro's cinematography providing aesthetic poetry in almost every scene. Peculiarly constructed and sometimes confusing, I found this film's debatable narrative faults to be conducive to its overall effect. John Malkovich and Debra Winger are outstanding, and there are plenty of strong supporting performances as well. A beautiful, unnerving epic drama.

The worst!!! When its finally over you find yourself asking, how can so many talented people make something this pretentious and odious.

Bertolucci's worst film. I would rather tear my eyes out than see this again.