Sheila Levine Is Dead and Living in New York (1975) 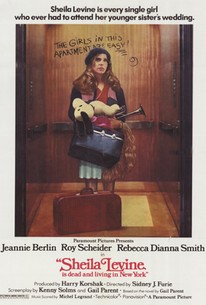 Sheila Levine Is Dead and Living in New York Photos

Sheila (Jeannie Berlin) is not one of life's golden people: she's not especially good-looking, charming, charismatic, or smart. As a result, she has to struggle constantly. For some reason, she decides to move from the suburbs to New York City. Now she has a roommate (Rebecca Dianna Smith), a job with a record company, and a self-imposed obligation to try to meet some men. One night she goes out to a singles bar and meets Sam (Roy Scheider), a nice-looking doctor. They have what is for him a one-night stand, but Sheila is smitten. She hasn't had all that much luck with men, and this one she would like to keep. Embarrassed, Sam tries as gently as he can to ignore her. This becomes much more difficult when he starts dating Sheila's personable roommate. The screenplay for this gentle comedy was adapted by Gail Parent from her best-selling book of the same name. ~ Clarke Fountain, Rovi

Victor Raphael
as Performer
View All

Nothing is inventive, nothing is clever, and certain attempts at wit are just plain embarrassing.

I don't know and don't care.

There are no featured reviews for Sheila Levine Is Dead and Living in New York at this time.

Sheila Levine Is Dead and Living in New York Quotes