She Wore a Yellow Ribbon1949 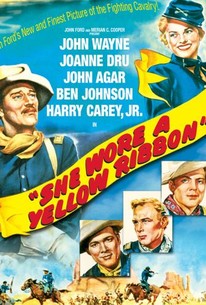 She Wore a Yellow Ribbon Photos

The second of John Ford's "Cavalry Trilogy," this film stars John Wayne as Cavalry Captain Nathan Brittles. In his last days before his compulsory retirement, Brittles must face the possibility of a full-scale attack from the Arapahos, fomented by the recent defeat of General Custer and by double-dealing Indian agents.

Critic Reviews for She Wore a Yellow Ribbon

A western meller done in the best John Ford manner.

A film of both elegiac sentiment and occasionally over-eloquent sentimentality.

Bulwarked with gay and spirited music and keyed to the colors of the plains, "She Wore a Yellow Ribbon" is a dilly of a cavalry picture. Yeehooooo!

In She Wore a Yellow Ribbon [John Wayne] is nothing short of superb. It is a performance that should, in all right, be a challenger for the Academy award.

The film boasts one of Ford's more uncommon storylines and some of his boldest uses of color cinematography.

This earned an Oscar for Best Cinematography, though had a Best Makeup award existed back then, surely Don Cash would have been a contender for superb work that allowed a then-41-year-old Wayne to convincingly pass for someone a quarter-century older.

A film more notable for its gorgeous cinematography than for its plot.

The second of John Ford's cavalry trilogy is well acted by John Wayne and well shot by Winton C. Hoch, who an Oscar for color cinematography.

First and most obviously one of the most flat-out gorgeous movies ever filmed.

an old man's movie shot with a young man's energy and gusto.

Audience Reviews for She Wore a Yellow Ribbon

Beautifully filmed and featuring many great performances. This is one of the most entertaining of Ford's films. Also includes the greatest performance ever put in by Victor McLaglen in his reoccurring role as Sgt. Quincannon.

A great follow up to Fort Apache and probably the grandest in the whole trilogy. The use of color is almost jaw dropping at times and the way the west is captured is utterly flawless. John Wayne delivers one of his best performances out of so many great ones. Captain Brittles is probably one of the most noble and courageous characters, certainly in terms of military movies. John Ford's vision and storytelling is just unlike anything else and this is such a beautiful movie to experience.

The compositions and photography around director John Ford's new stamping ground of Monument valley are great to look at as always. With some makeup to grey his hair and wrinkle him a might, John Wayne turns in one of his finest performances on the screen. The rest of the cast measures up equally well. Victor McLaglen, as irascible as ever, plays Irish Top Sergeant Quincannon, full of blarney and (a bit of) whiskey. His morning scenes with Wayne, denying he'd been drinking, are comic gems. I like the scene of McLaglen battling men in the bar. As the young suitors of Joanne Dru, John Agar and Harry Carey Jr. are also quite good.

John Ford's classic has lost a little of it's edge over the years, but it is no way a bad film. Quite the opposite.

She Wore a Yellow Ribbon Quotes