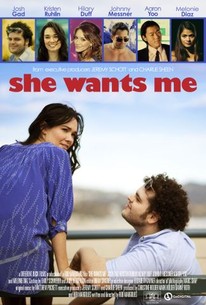 She Wants Me Photos

Meet odd couple: Sam and Sammy. They're a loveable New York native couple living together in Los Angeles. They're barely getting by, yet happy enough, until Sammy's strapping and extremely successful ex-husband, John, whom she still may be in love with, unintentionally imposes as their houseguest to help them out financially. Before Sammy, Sam hasn't had much success romantically. In fear of losing her to John, Sam offers Sammy the lead role in his next movie... the night before one of Hollywood's hottest, most in demand actresses, Kim Powers, expresses interest in playing the role. Now Sam's caught in a pickle.

Wayne Knight
as Walter
View All

Critic Reviews for She Wants Me

There are no critic reviews yet for She Wants Me. Keep checking Rotten Tomatoes for updates!

Audience Reviews for She Wants Me

This latest comedy starring Josh Gad, Kristen Ruhlin and Hilary Duff is written and directed by Rob Margolies. I have to say at the beginning: I expected so much more! The story of Sam (Josh Gad), who is a writer, and is working on a feature film, somehow was very messy from the start to the end! It was like a work of those untidy school kids who always have stains and smudges on their homework! In this story Sam's girlfriend has been promised the lead role when a well-known starlet, Kim Powers (Hilary Duff) suddenly becomes interested in the part. And Sam decides to change his mind... ok, that is just a part of the story, but you don't need to worry about the complexity of it - it is quite straight forward... actually, too straight forward! The acting was kind of a neurotic and the situations which are supposed to be tricky were in most cases plain stupid!They promissed hilarious movie... but we got only hi...

She Wants Me Quotes