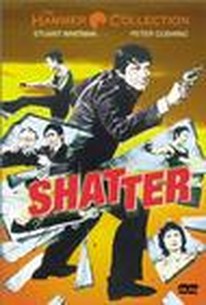 Mr. Shatter (Stuart Whitman) is an international assassin, hired to bump off a top government official. He is compelled to fend off a host of Oriental kung-fu and karate experts. Peter Cushing and Anton Diffring make brief appearances. The film -- shot simultaneously with Legend of the Seven Golden Vampires, which also co-starred Peter Cushing -- was something of an experiment for the ailing Hammer studios in the mid-'70s, shortly before they expired, attempting to mix an Oriental style with their own distinctly British brand of filmmaking. In most markets, Call Him Mr. Shatter was released simply as Shatter. ~ Hal Erickson, Rovi

There are no critic reviews yet for Shatter. Keep checking Rotten Tomatoes for updates!

This is a Hammer Production, and I am told Hammer teamed up with the Shaw brothers which combined to make a pretty good film considering the Film is from 1974 when International Spy's were all over the screen thanks to Dr. No and Gold finger the James Bond Films, This is not about a secret agent, but has the cool things a secret agent would have. Stuart Wittman is a modern day (1974 Modern Day) killer and has been hired to wipe out a African president. He enters his hotel room with a Camera that shoots bullets, kills the president and one of his aids. Then flees to Hong Kong to collect his money, but man who hired him refuses to pay, so begins the killing, and kung fu scenes that help a low in action and drama. Peter Cushing makes a surprise appearance as the Police Commissioner of Hong Kong, this was Cushing?s last movie for Hammer. Its worth 3 stars, a good rental or pawn shop buy.