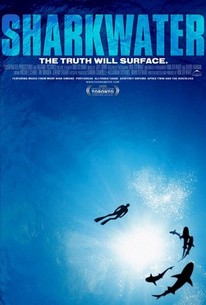 Critics Consensus: In addition to its breathtaking underwater photography, Sharkwater has a convincing, impassioned argument of how the plight of sharks affects everyone.

Critics Consensus: In addition to its breathtaking underwater photography, Sharkwater has a convincing, impassioned argument of how the plight of sharks affects everyone.

Critic Consensus: In addition to its breathtaking underwater photography, Sharkwater has a convincing, impassioned argument of how the plight of sharks affects everyone.

For filmmaker Rob Stewart, exploring sharks began as an underwater adventure. What it turned into was a beautiful and dangerous life journey into the balance of life on earth. Driven by passion fed from a lifelong fascination with sharks, Stewart debunks historical stereotypes and media depictions of sharks as bloodthirsty, man-eating monsters and reveals the reality of sharks as pillars in the evolution of the seas. Filmed in visually stunning, high definition video, "Sharkwater" takes you into the most shark rich waters of the world, exposing the exploitation and corruption surrounding the world's shark populations in the marine reserves of Cocos Island, Costa Rica and the Galapagos Islands, Ecuador.

Eric Ritter
as Himself

Dr. Boris Worm
as Himself

Patrick Moore
as Himself

Rex Weyler
as Himself

With its stunning photography this would be a righteous and magnificent documentary were it not for the on-camera presence of film-maker Rob Stewart, marine biology's answer to Tom Cruise.

Stewart's point is that the shark fin industry, in its short-sighted quest for financial gain, may trigger an ecological disaster beyond the extinction of the sharks themselves. This is depressing, but important, stuff.

Faintly egotistical biologist-turned-filmmaker Rob Stewart spent four years making this investigative doc and the result, despite his tendency towards over-earnest, stoner-esque commentary, is enlightening, shocking and more than a little worrying.

Sharkwater delivers an important message, and its underwater photography is breathtaking. But Stewart lessens the impact by focusing much too much on himself. Did he really have to go into detail about his own health problems?

Undersea photographer Rob Stewart, who directed, wrote, narrated, stars in, and helped shoot Sharkwater, really, really loves sharks. He also fears for their future on the planet. His lively documentary makes you see why, on both counts.

This beautiful and horrifying debut feature by the underwater cameraman Rob Stewart of Toronto characterizes the depletion of the world's shark population as an ecological catastrophe with dire consequences for humanity.

It's hard not to admire a man with such admiration for the obscure, but Grizzly Man did it much better.

If the film sometimes gets choppy, the filmmaker's passion for the subject and the disturbing revelations to be gained from watching the film make it more than worthwhile.

It's Jaws - starring man as a far scarier predator.

It's a film you come away from feeling that you should get out there on the streets and start marching for sharks.

Planet Earth saturation and the bludgeoning political stance pull it down, but it's still a consistently engaging, partly thrilling look at a misunderstood species.

As I thought, this was an eye opening movie, with a lot of good and sometimes unsettling footage. It was well done and I think there were some technical nuances that could have been made to streamline the picture, but it had my attention the entire time. Although a lot of people are not interested in this type of film, or its subject matter, I think we really do need to be educated about issues such as this one. There are a lot of things going on in the world that are blatant abuses of people, animals and resources around the globe. I believe that everything on this earth if for humanity to use and care for, but I am strongly against the abuse of these resources, living and nonliving alike. See this movie and similar ones like it.

A counterpoint to most of the sensational shark documentaries out there, this one introduces sharks as shy and amazing. It focuses on the fishing, finning, and depopulation issues. Even the mob and Greenpeace are involved. An interesting film for those looking for another side to sharks and our global aquatic ecosystem.

I loved this documentary. It was so beautiful but it shed light on things humans are doing that are, at best, ugly. We need ALL animals here and everyone needs to see this film to become more open-minded about sharks and stopping the disgusting practices that are endangering their existence.

However interesting the situations, deserves a more objective perspective.