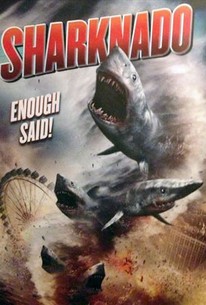 A freak storm brings hundreds of vicious, man-eating sharks ashore in Los Angeles and a group of friends struggle to steer clear of their violent and destructive path. ~ Megan Walsh-Boyle, Rovi

Oh sure, it's easy to pick holes in a story about a weather system that makes it possible for sharks to fly and take to the streets, but that's the whole point of movies like this: fabulous in-home commentary.

What the film does have is some fantastically cheesy lines combined with some humorous social commentary.

Every so often, something comes along that puts a skip in your step, makes your heart flutter, and sets your imagination ablaze with possibility.... If you're really lucky... it'll be a swirling mass of bloodthirsty sharks.

Sharknado is an hour and a half of your life that you'll never get back. And you won't want to.

With few tricks up its sleeve, Sharknado only adds to the list of hysterical Syfy monster-dramas that make for a shamelessly brainless 90 minutes well-spent.

Lacks the sincerity that the likes of Plan 9 has or the genuine ambition & talent of much of the output Corman produced in the '70s that made those drive-in films so endearing beyond the concepts and poster art used to get people into the theater.

Blood, gore in hilarious B-movie make this best for teens.

You couldn't even say this movie is so bad that it's good, because it's seriously terrible, but it's also hilariously entertaining.

Like other midnight specials, Sharknado is made for mockery, but it lacks the sincerity that have made The Room and Birdemic: Shock and Terror, so richly laughable.

There is, as they say, a fine line between stupid and clever, and this film twirls along it like a pro. Definitely worth a bite.

This was the absolute worst. Just...no.

We're gonna need a bigger chopper! Funny Movie but just a bad overall movie! Let me just say that I watched this movie to be entertained not enthralled or hanging on the edge of my seat but just distracted and carefree for a couple of hours. I got what I wanted. Only, I didn't expect to laugh so much. I'm thankful for the laughter, though, because it kept at bay any sort of aesthetic sense that might have interfered with my viewing pleasure. If you want to be moderately entertained, then I don't think you will be disappointed with Sharknado. Don't expect too much going into it-and bring with you a willingness to suspend your own sense of disbelief. Most important, keep in mind that this is not Jaws. I don't think that fact will slip you mind, however. The director made sure of it. When a freak hurricane swamps Los Angeles, nature's deadliest killer rules sea, land, and air as thousands of sharks terrorize the waterlogged populace.

"Sharknado" takes everything that is good even in the worst of films, throws it out the window, and does whatever it feels like doing. This is not a movie, but a parody on Hollywood films, and the dialogue in the film, along with the deaths, speak that to it's audience, and if you are not a big film fan I'm pretty sure this film will make you rip your head off, due to it's god awful visuals and horrific acting. I felt like I let a doctor physically enter my mind and take out any brain cells I had left. From helicopters easily flying directly beside tornados to people stating the obvious, this is (even though one of the worst films ever) one of the most enjoyable films I've watched this year, but for all the wrong reasons. This film is terrible gold!

The title alone is worthy of jokes and Anthony C. Ferrante's Sharknado is a joke.

The movie is a complete bore. The film is about a tornado of sharks and that doesn't happen to about an hour in. On top of that, the story is only 85 minutes long. A "sharknado" is unrealistic enough, who cares about building up to make it seem realistic. Just go with the damn thing.

The film style is extremely inconsistent. The CG is poor and back to back scenes that don't match fill the picture from the first to last scene. Flooding here, not flooding the next. Highly annoying.

There isn't much to say about the acting. Ian Ziering somehow manages to show that he at least partially is into the story. On a side note, Cassie Scerbo is a hottie.

Sharknado sounds like a thrill ride, but it's the exact opposite. Take it seriously or not, there is slim to none laughs to be had.