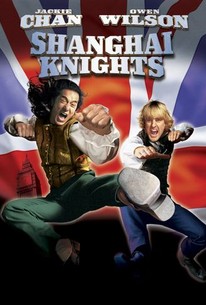 Critics Consensus: A silly, anachronistic mess, but the pairing of Chan and Wilson makes the movie fun.

Critics Consensus: A silly, anachronistic mess, but the pairing of Chan and Wilson makes the movie fun.

Critic Consensus: A silly, anachronistic mess, but the pairing of Chan and Wilson makes the movie fun.

East and West team up to take on bad guys in the British Empire in this sequel to the action comedy hit Shanghai Noon. Chon Wang (Jackie Chan), once an Imperial Guard in China, is now the Sheriff of Carson City, NV, while his onetime cohort, former train robber Roy O'Bannon (Owen Wilson), scrapes together a living writing dime novels based on his adventures and waiting tables in New York City. However, when Wang learns that his father was killed by bandits who broke into the Emperor's palace and stole the Imperial Seal, he's determined to bring the criminals to justice. Wang's sister Lin (Fann Wong) has learned that the killers have escaped to London, so Wang travels to England to meet her, with O'Bannon in tow. As Wang and Lin -- whose martial arts skills rival those of her brother -- look for the culprits, they discover that Lord Rathbone (Aidan Gillen), who is looking to shorten his path of succession to the British throne, is in cahoots with Wu Chan (Donnie Yen), the bastard son of the Chinese Emperor's father, who needs the Imperial Seal as part of his plan to win control of the nation. As Wang and Lin try to get to the bottom of Chan's schemes, O'Bannon finds himself infatuated with his pal's sister. While set in Victorian London, Shanghai Knights was actually filmed on locations in the former Czech Republic, which more closely resembled turn-of-the-century England.

Constantine Gregory
as The Mayor

Oliver Cotton
as Jack the Ripper

Jonathan Harvey
as Fagin No. 1

Richard Bremmer
as Master at Arms

Matthew Storey
as Fagin No. 2

Barbora Nedeljakova
as Debutante No. 3

Eva Ruzicka
as Debutante No. 4

Karel Urban
as Quartet
View All

It's a merry surfeit, lofted by calisthenic wow above the usual level for late-era Jackie and Wilson's mellow-gold delivery.

Knights will surely find an enthusiastic following before it gets to video.

A desperately unfunny action comedy, mirthless not only in its effect on an audience but in its whole aura.

Jackie Chan and Owen Wilson bring the Far East and the old West to 19th century London as they search for Chan's sister (Fann Wong) in Shanghai Knights (2003), a high spirited but dumbed-down sequel to Shanghai Noon.

There are no surprises here.

Martial arts buddy sequel is exactly what you expect.

The Chan/Wilson chemistry that drove the first film and draws people back to this one hasn't lost any of its snap.

You have to wonder when these lackluster Chan and Wilson vehicles will end.

105 minutes of adventure, action, and comedy sums up this picture. On top of that, it does all three without fail. The story, while obnoxious, is full of references and entertainment value. There is never a dull moment as the story pushes forward and the comedy keeps coming.

The action is highly stylized and a barrel of fun. The stunt work and usage of objects generate highly amusing fights. The background music during some of these segments is worthy of note as well.

From time to time, Owen Wilson comes across as cheesy; however, he blends in with the style of the film. Jackie Chan does what he does best, and that is beat the living daylights out of people. Fann Wong, Donnie Yen, Aaron Taylor-Johnson, and Aidan Gillen round out a solid cast of characters.

Shanghai Knights succeeds in what it sets out to do, thus leading to a better than average action adventure.

A tad disappointing but still good considering that Shanghai Noon was a lot of fun with great gags and action, this one is good but lacks the effectiveness of the first film. This sequel is still funny, with lots of good comic bits and the cast delivers. If you've enjoyed the first film, then you're sure to enjoy this film because of the fact that it kept most elements of the first film intact. Owen Wilson and Jackie Chan still have good chemistry and they are both very funny. As a sequel the film is pretty considering the fact that sequels are usually hit and miss. With Shanghai Knights, there's plenty to enjoy and is a good sequel that will most likely appeal to people who enjoyed the first. The film has effective comedy blended with good action that's really lots of fun. Shanghai Knights is a definite must see if you want something funny and entertaining. The best way you can view this film is pure entertainment. This is a film that really shouldn't be taken seriously, and despite the fact that it's imperfect, this is still very much a lot of fun from start to finish. Shanghai Knights is a good comedy that is supported by a good cast. I very much enjoyed the film, but is not as good as the first. However with every sequel that's to be expected. This is a fun film to watch, and like I said if you enjoyed the first, you're probably going to enjoy this one too. What made this film worth watching was the comedy that really stood out, and though not as good as the original, the film is still worth your time if you're in the mood for some silly entertainment.