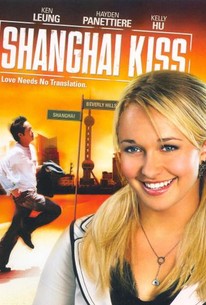 A struggling Los Angeles actor who has never fully grasped his Chinese roots takes an eye-opening journey to Shanghai after inheriting his grandmother's home in this romantic comedy starring X-Men: The Last Stand's Ken Leung and Heroes's cheerleader Hayden Panettiere. Liam (Leung) is an aspiring Hollywood star who spends the majority of time picking up bar girls with his best friend Joe -- a starving writer who has yet to pen a proper screenplay. While Liam does share an innocent relationship with precocious 16-year-old Adelaide (Panettiere), she often comes off as more mature than he and the age difference between the pair is far too glaring to ignore. Upon receiving notice that he has inherited his grandmother's home in Shanghai, Liam throws caution to the wind and purchases an airplane ticket. Shortly after landing in China, Liam becomes smitten with beautiful local Micky (Kelly Hu) and gradually learns to embrace his Eastern roots. But it's difficult to exist comfortably between two cultures -- much less two women -- and before long Liam finds that in connecting with the past, he is simultaneously laying the groundwork for his future.

There are no critic reviews yet for Shanghai Kiss. Keep checking Rotten Tomatoes for updates!

Panettiere was way too bubbly/sugary sweet. Ken Leung was alright as an Asian New Yorker, who several times kind of showed the mannerisms of Woody Allen. Ken as Liam struggles with dating. The dialog sounded like it came from a film school assignment trying to sound smart by dropping classic film quotes and trying to be "real" and idiosyncratically L.A. with all the women Liam picks up. It didn't hold my attention. I hit the fast forward, as it were, on Hulu several times.

Faintly disturbing. Panettiere is a sweetheart though.

This one was a surprise. I expected some PG thing judging by the cover. This was actually quite a serious film about a Chinese American man struggling with his identity. Hayden is actually a little too sugary in the part and doesn't quite fit, but I guess her character does lighten things up a bit. I was really tempted to switch it off ten minutes in, but I'm glad I perservered with it.

Shanghai Kiss delivers a vivid and clear message: love transcends all. The acting was very captivating. Ken's performance warms on you as the movie goes on and he really wows you the more you see him. Hayden of course was adorable and sweet as always with her role. Her character's hope, faithfulness, and never-give-up attitude is infectious and desirable and inspirational. Also, Ken's quest for his roots takes him back to a place that ultimately helps him to see his present place much more clearly and better than before. It's a great film about discovery and journey, sacrifice, and ultimately love. It's too bad this film didn't really hit it on the big screen but the performances are superb and you have to love Hayden's voice - she's a great singer. And she is cute. 4 and a half stars.