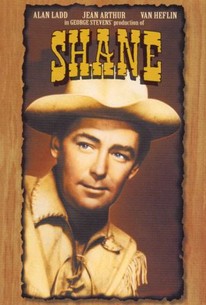 The story of a Wyoming range war is elevated to near-mythical status in George Stevens' Western classic Shane. Alan Ladd plays a mysterious drifter who rides into a tiny homesteading community and accepts the hospitality of a farming family. Patriarch Joe Starrett is impressed by the way Shane handles himself when facing down the minions of land baron Emile Meyer, though he has trouble placing his complete trust in the stranger, as his Marion is attracted to Shane in spite of herself, and his son Joey flat-out idolizes Shane. When Meyer is unable to drive off the homesteaders by sheer brute strength, he engages the services of an evil hired gun.

AFI Announces Top 100 Movies of All Time … Again
The Weekly Ketchup: "Ghostbusters 3" Close To Fruition, Direct-To-Video Sequels Galore, "Ghost Rider" Screening Or Not Screening. Who Knows?
One-Armed Push-ups All Around in Honor of Jack Palance

Wyoming's scenic splendors against which the story is filmed are breathtaking. Sunlight, the shadow of rain storms and the eerie lights of night play a realistic part in making the picture a visual treat.

Here, as too often in his career, Stevens is aiming to have the last word on a genre: everything aims for 'classic' status, and everything falters in a mire of artsiness and obtrusive technique.

Stevens' classic Western, with its inflated reputation, now looks as if it were self-consciously intended as a landmark film right from the start.

For Shane contains something more than beauty and the grandeur of the mountains and plains, drenched by the brilliant Western sunshine and the violent, torrential, black-browed rains...

There are intriguing mysteries in Shane, puzzles and challenges, not least in the title character and the way he is played by Alan Ladd.

Director George Stevens and writer A. B. Guthrie Jr. have fashioned one of the best of all the Hollywood westerns...

The simple story, the legendary hero: this is the Western tradition. But in developing his narrative George Stevens employs an unusually sophisticated technique.

A film that continues to maintain its condition of unscathed classic, although it has its detractors. [Full review in Spanish]

To a degree, Shane employs the good-guy/bad-guy stereotypes that characterize Westerns. But it's more complex than that.

It is a movie that takes its own measured, deliberate time finding ways to increase your pleasure.

"Come back, Shane!" Classic Western for the ages.

George Steven Jr.'s epic about grit involved by the homesteaders when going against the cattle barons is given a beaut of a spacious locale (The Grand Tetons) to underline the lives of the small people struggling beneath them. Ladd is stoic as the gunfighter trying to leave his past, paired against, and with, the warmer-hearted Van Heflin as a sturdy minded if poor homesteader. Their duality gives the mix it's gumption, beginning early with the men tackling the big job of a deep-rooted stump of a dead tree. Stand out performances from Jack Palance and, as ever, Elisha Cook Jr. while Jean Arthur has to make do with the fewest of lines to sketch a woman torn between two men.

The dazzling cinematography that explores the bucolic and idyllic landscapes, together with the strong ensemble cast, contributes to make this an unforgettable Western tale about a complex, divided hero and the relationship that he develops with a peaceful family.

Often considered a high watermark for the western genre, and an integral part of the mythologizing of the Old West, this is George Stevens's production of that age -old story of a rugged loner who, bound by a sense of honor and decency, finds himself returning to a life he long abandoned and vowed to never return to, but does, because he realizes there is a greater good in it, even if it weighs heavy on his soul. In simple terms (as this is a simple and straightforward movie), this is about a loner and retired gunfighter named Shane who one day comes across the land of a simple homesteader, and stays to help defend the man against a wealthy cattle baron and his thuggish hired guns. Even when this was released, the story was nothing new, and yet, there's a very endearing quality about it that makes it hard not to like. I am underwhelmed by it, as I didn't end up loving it like I've been told I should, but relax, I still liked it, even if it did sorta let me down. Part of the reason may be because of the fact that the stroy is so simple and straight forward. There's nothing really complex or deep on display, although I was suprprised by the ambiguity and maturity of the ending. I wasm't expecting that, but I do really appreciate it. Now, I had the final scene spoiled for me many tiems before, but seeing it in context it was really makes it work, and where the ambiguity comes in. I figured given the time period, it would have been more neat, tidy, and on the nose, but I won't complain with how they decided to do it. Despite the simplicity of the rest of it though, the film sure feels a lot longer than two hours, and the drawn out-ness could have been used to greater effect. Either that or cut the running time down to the bare essentials. Despite the above nit picking though, this is a pretty solid film. The casting is good, and the performances are quite good. Alan Ladd is terrific as Shane, Jack Palance is in good form as the thug Jack Wilson, and even the little kid Brandon De Wilde isn't annoying enough to derail thigngs. Plus, the cinematogrpahy is just excellent, and I can see why it got so much acclaim back in the day. The film might be pure cliched formula, and perhaps a tad too sentimental and simple, but it is quite charming, and it has artistic merit. Even though it is overrated and underwhelming (mostly), I still recommend it, as it did help shape popular perception of the west and westerns in a significant way.

Shane, for the most part, fails to entertain or to offer high-quality story telling, which makes me wonder why we all consider it one of the great classics. You'll probably have more fun watching most other early westerns.