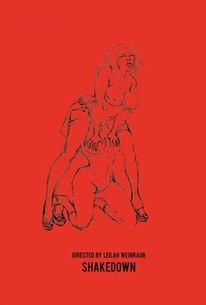 Shakedown is the story of Los Angeles' black lesbian strip club scene and its genesis. Owned and operated by women, underground and illegal in nature, the club Shakedown is the darker, faster, younger iteration of this dance culture. The film is a window into this world. Shakedown emerged from a post-RIOTS, post-OJ, post-integration but still very racially divided Los Angeles. In this divided city Shakedown is an independent, all black and all female cash economy. Shakedown chronicles the explicit performances and personal relationships of the party's dancers and organizers including Ronnie-Ron, Shakedown Productions' creator and emcee; Mahogany, the legendary "mother" of the community; Egypt, their star performer; and Jazmine, the "Queen" of Shakedown.

Performance is at the heart of "Shakedown," one of the reasons it's rich fodder for brainy considerations of LGBTQ identity and gender.

A film like Shakedown reminds viewers how hyper-masculine the gay-doc genre is. It's almost as is if most of them forget that the first letter stands for lesbian.

A thrilling and also valuable film. The audience must take the imaginative leap and accept the contradicting identities that Weinraub presents, without insisting that they must cancel out.

An artifact of a bygone time and place than anything. Weinraub captures everything, from interviews to in your face/fly on the wall conversations, with attentiveness and courage, spending the kind of effort only someone who truly cares would give.

It's a nuanced, moving look at a haven of sexual freedom and expression, and raucous fun at the same time.

Kambole Campbell
One Room With A View

Rich with personalities, politically astute, and as nasty as it wants to be, Shakedown is a queer cultural intervention on par with Paris is Burning, without the touristic undertones.

Suffice to say, this is not your average documentary. We should be happy indeed for such a welcome revelation of a vivacious sexualized and racialized side of work and play that is too often, even now, relegated to a social underground.

There are no featured reviews for Shakedown at this time.