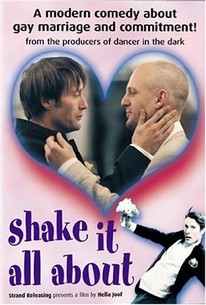 Danish theater director Hella Joof segues into feature directing with her 2002 debut Shake It All About. Madly in love, Jacob (Mads Mikkelsen) and Jorgen (Troels Lyby) hope to make it official and wed sometime next summer. However, one fateful night Jacob and Caroline (Charlotte Munck) -- Jorgen's sister -- share an unexpected kiss that makes Jacob's heart flutter with the sudden realization that he not only loves Caroline, but that he is also in love with a woman. As the two begin their secret, tempestuous fling, Jorgen begins to suspect something is amiss and he finally confronts Jacob -- who promptly confesses to his infidelity. Rightfully enraged, Jorgen storms out of the house and gets injured in a car wreck. As Jacob decides to patch things up with Jorgen, Caroline informs him that she is probably carrying his child. While the news is exhilarating, Jacob is not exactly eager to inform Jorgen of this development -- much less Caroline's husband Tom (Jesper Lohmann) -- which leaves Jacob with some tough decisions to make that will affect the futures of nearly all his friends and family. Shake It All About was selected for inclusion into the Cinema of Tomorrow program at the 2002 Montreal World Film Festival. ~ Ryan Shriver, Rovi

Critic Reviews for Shake It All About

The promise of that opening line never really gets fulfilled.

Something you needn't leave home to see.

It's OK for a film to be as confused as its main character. But when said character is a homosexual man who may be falling in love with the wife of his partner's brother, you have to pity the film.

...just might be the first unabashedly sentimental romance featuring gay men instead of Meg Ryan and Tom Hanks.

The film has plenty of wicked social jokes you needn't be Danish to get.

There are no featured reviews for Shake It All About at this time.

Shake It All About Quotes