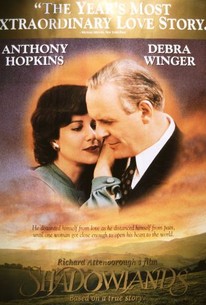 This lavishly mounted adaptation of the play by William Nicholson tells the true story of the doomed love affair between novelist and noted Christian scholar C.S. Lewis and a Jewish-American poet. Anthony Hopkins stars as C.S. "Jack" Lewis, an Oxford professor and successful author of the Chronicles of Narnia series of children's fantasy novels. A confirmed bachelor, Jack's existence is an inward life of the mind. Somewhat detached from the world, his only social outlet is evenings out at a local pub discussing philosophy and religion with his fellow lecturers. Jack has been corresponding with a bluntly intelligent American woman, Joy Gresham (Debra Winger), who arrives to visit him, with her young son Douglas (Joseph Mazzello) in tow. She tells Jack that she has actually fled from an abusive marriage and plans to divorce, and Jack astonishes friends and family by agreeing to a platonic marriage with Joy so that she can obtain British citizenship. As their friendship deepens and Joy discovers that she has a terminal illness, the relationship between Joy and Jack becomes a genuine romance, and their marriage turns into a real commitment. Shadowlands (1993) had previously been filmed as a well-regarded British television movie in 1985 starring Joss Ackland as Lewis.

Sylvia Barter
as Woman in Bookshop

James Watt
as Boy in Bookshop

It's not hard to see what drew Richard Attenborough to the story. It is a character-driven piece with two potent leading roles, and he is a former actor known for teasing outstanding performances from his cast.

Biting down on his pipe, his shirt collar permanently askew, Hopkins assays another concerted study in English repression -- a condition unexpectedly relieved by Winger's brash intelligence and brittle wit.

Superlative acting by Hopkins and Winger elevates this fictionalized late-in-life romance between the repressed British scholar and writer C.S. Lewis and the American Jewish housewife-poet who introduces him to sex and rejuvenates his life.

Here is Mr. Hopkins giving an amazingly versatile and moving performance, shifting the light in those knowing blue eyes to reveal endless shadings between delight and sorrow.

It understands that not everyone falls into love through the avenue of physical desire; that for some, the lust may be for another's mind, for inner beauty.

Shadowlands is illuminated from beginning to end by Hopkins. This may be the best thing he's ever done.

This is the biggest tear-jerker you could ever see.

Glossy and effective, but not as good as the Joss Ackland version.

Anthony Hopkins gives one of his best performances (there are so many) in this film.

A deeply personal and moving love story filled with many moments of beauty, joy and healing.

Hopkins gives us a wonderful portrait of a believer who is forced to confront his faith when a partner becomes terminally ill.

Another beautiful true story of a famous personage -- the neat thing that the son actually helped on this movie!

Romantic moving about CS Lewis and his American divorcee. CS Lewis was from my hometown.