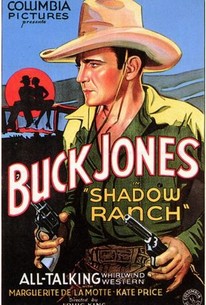 The second in a series of Buck Jones westerns produced by Sol Lesser for Columbia release, Shadow Ranch is the story of a cowboy who comes to the rescue of an embattled female rancher (Marguerite de la Motte). She is being driven off her land by opportunistic saloon owner Albert J. Smith, but the heroic Buck manages to beat the villain into submission. Filmed at the Tiffany-California studios, a rental facility, Shadow Ranch was popular enough for the story to be trotted out again less than a year later as Sunset Trail starring Ken Maynard.

Hank Bell
as Barfly
View All

There are no critic reviews yet for Shadow Ranch. Keep checking Rotten Tomatoes for updates!

There are no featured reviews for Shadow Ranch at this time.