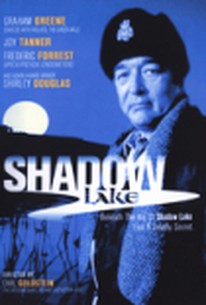 When the frozen body of a long-missing man is discovered under the ice of Shadow Lake, the secrets that begin to surface threaten to tear the small community apart at the seams in this thriller from director Carl Goldstein. Upon receiving word that the body of her missing father has been discovered, Stephanie Garvey (Joy Tanner) travels back to her home town to pay her last respects and assist in the ensuing investigation. As the ominous small town secrets begin to surface and the happy façade of Shadow Lake is slowly melted away, Stephanie enlists the aid of her estranged mother (Shirley Douglas) and the even-handed Sgt. Longfellow (Graham Greene) in piecing together the clues that her father left behind before she too falls prey to the murderous secrets that plague Shadow Lake. ~ Jason Buchanan, Rovi

There are no critic reviews yet for Shadow Lake. Keep checking Rotten Tomatoes for updates!

There are no featured reviews for Shadow Lake at this time.