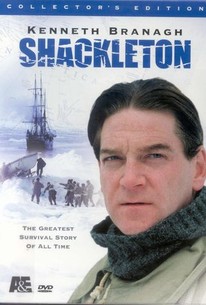 All but forgotten at the time of his death in 1922, controversial British explorer Ernest Shackleton would enjoy a rediscovery of sorts decades later, with dozens of books and filmed documentaries devoted to his "magnificent blunder" -- the failed Imperial Trans-Antarctic Expedition of 1914-1916. On the sheer weight of his dynamic personality, Shackleton was able to mount an exploratory journey to the Antarctic, accompanied by a crew of 27 men, among them celebrated Australian photographer Frank Day. Alas, Shackleton's ship was crushed by packing ice early in the expedition, forcing the crew to brave the merciless polar elements for a full ten months. Making matters worse, public concern over Shackleton's plight was shunted aside when Great Britain entered WWI. First telecast in England on January 2 and 3, 2002, the two-part TV biopic Shackleton stars Kenneth Branagh in the title role. The script does not shirk away from the subject's less savory character traits, including his disastrous financial dealings and his blatant unfaithfulness to wife Emily (Phoebe Nicholls). Nonetheless, one emerges from the film with a renewed respect and admiration for the visionary Shackleton and his bedraggled companions. Much of the imagery in Shackleton was based upon the still-surviving films made on the scene by Frank Day, adding extra authenticity to the drama even though the film was made in Greenland and Iceland rather than the Antarctic. The two-part film made its American TV debut courtesy of the A&E cable network on April 7 and 8, 2002; shortly afterward, Shackleton was released on DVD, with four additional hours of documentary footage. ~ Hal Erickson, Rovi

Shackleton is all Branagh, a pure delight to watch as he maintains his humanity in the face of terror and becomes the brave face of his 50-plus men.

It's an amazing story, wonderfully told.

Disappointing, especially in comparison with the documentaries on Shakleton.

If you love bios or docudramas the way I do, you'll enjoy this one. A really great historical story with in-depth character and historical details that might bore some, but I found fascinating. This film takes it's time in telling the story so that you fully understand the character, and the obstacles he faced to accomplish his expedition. Wonderful A&E mini-series.

I normally love movies based on true stories but this one was too long and boring. There was only about an hour of this movie that I found interesting (once they were stuck on the ice). Watching them kill their animals upset me, too!