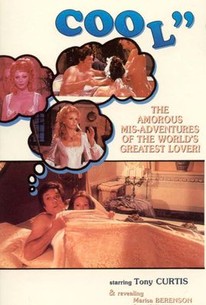 In a way, the title of Some Like It Cool was a piquant comment on the career of star Tony Curtis, whose stardom had chilled since his 1959 appearance in Some Like It Hot. This time around, Curtis plays famed 18th-century lover Giacomo Casanova. The plot would have us believe that Casanova has suddenly turned impotent, and is deploying all manner of subterfuge to hide the fact. One of Casanova's stratagems is to hire a look-alike (also Curtis) to uphold his reputation between the sheets. The stellar supporting cast -- Marisa Berenson, Hugh Griffith, Britt Ekland et. al. -- seem far more embarrassed by their tawdry, topless surroundings than Curtis, who steamrolls his way through the film with the same dogged determination that he'd demonstrated in his "Yonda lies the castle of my fadduh" formative years.

Marisa Berenson
as The Caliph's Wife

Hugh Griffith
as The Caliph

Marisa Mell
as Duchess of Cornaro

Jean Lefebvre
as The Sergeant

Andrea Ferreol
as The Baker's Wife

Sylva Koscina
as The Prefect's Wife

Victor Spinetti
as The Prefect

Critic Reviews for Sex on the Run

There are no critic reviews yet for Sex on the Run. Keep checking Rotten Tomatoes for updates!

There are no featured reviews for Sex on the Run at this time.

Sex on the Run Quotes