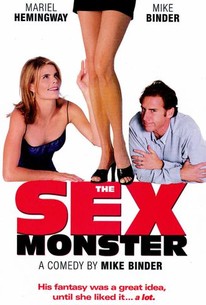 A man convinces his wife to participate in one of his sexual fantasies and lives to regret it in the farcical comedy The Sex Monster. Marty (Mike Binder) is a building contractor who is married to a beautiful woman named Laura (Mariel Hemingway). While reasonably happy in his marriage, Marty has always had a fantasy about having a menage a trois, and when he starts to feel his sex life with Laura is getting stale, he suggests they bring in another woman and give it a try. Laura is reluctant at first, but Marty refuses to drop the subject and eventually she relents, and a second woman is introduced to the bedroom. However, Marty is soon too tired to continue with the fun, and Laura and her new friend go on without him. While she's coy about it at first, it quickly becomes obvious Laura enjoys adding another woman to the mix a lot more than Marty does, and she starts aggressively pursuing new female companions. While Laura doesn't mind if Marty joins in, she and her partners seems to be enjoying themselves enough that's he feels like a fifth wheel, since Laura seems to have much clearer ideas about female eroticism than he does. Mike Binder wrote and directed The Sex Monster, as well as playing the male lead; Stephen Baldwin also appears in a supporting role. Despite its subject matter, this film features little nudity, with the sexual escapades discussed or inferred rather than shown.

Critic Reviews for The Sex Monster

There are no critic reviews yet for The Sex Monster. Keep checking Rotten Tomatoes for updates!

Audience Reviews for The Sex Monster

There are no featured audience reviews yet. Click the link below to see what others say about The Sex Monster!