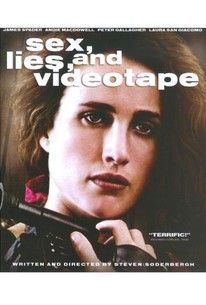 Critics Consensus: In his feature directorial debut, Steven Soderbergh demonstrates a mastery of his craft well beyond his years, pulling together an outstanding cast and an intelligent script for a nuanced, mature film about neurosis and human sexuality.

Critics Consensus: In his feature directorial debut, Steven Soderbergh demonstrates a mastery of his craft well beyond his years, pulling together an outstanding cast and an intelligent script for a nuanced, mature film about neurosis and human sexuality.

Critic Consensus: In his feature directorial debut, Steven Soderbergh demonstrates a mastery of his craft well beyond his years, pulling together an outstanding cast and an intelligent script for a nuanced, mature film about neurosis and human sexuality.

Steven Soderbergh kickstarted the independent film movement of the 1990s with this landmark drama about the tangled relationships among four people and a video camera. John (Peter Gallagher) is an unscrupulous, self-centered yuppie lawyer with a beautiful wife named Ann (Andie MacDowell). Ann feels secure and well provided-for in their relationship, but she has almost no interest in sex; she tells her therapist that she's more concerned about waste disposal. John, however, is still quite interested in sex and is having an affair with Ann's sister Cynthia (Laura San Giacomo), whose personality is fire to Ann's ice; sex is the one area in which she's been able to best her more successful sister, and she relishes her ability to seduce Ann's husband. Into this dysfunctional picture comes Graham (James Spader), a college friend of John's whom he hasn't seen in nine years. Graham has decided that talking about sex is more interesting than actually having sex, so he meets women and asks them discuss their desires and fantasies as he tapes them with a camcorder. A sensation at the Sundance Film Festival, the film made that festival a synonym for a new brand of low-budget indie dramas about contemporary life and relationships. Together with Quentin Tarantino's very different Pulp Fiction (1994), sex, lies, and videotape was one of the most influential movies for independent filmmaking of the 1990s. ~ Mark Deming, Rovi

Alexandra Root
as Girl on Tape

What amazes is that at just 26, Soderbergh displays the three qualities associated with mature filmmakers: a unique authorial voice, a spooky camera assurance, and the easy control of ensemble acting.

The actors are superb; working from Soderbergh's funny, perceptive, immaculately wrought dialogue, they ensure that the film stimulates both intellectually and emotionally.

A film whose enormous authority and intelligence extend to every detail.

Wwriter/director/editor Soderbergh has composed a wry, highly watchable piece that comes across as a great first effort by a film-school graduate.

No one is easily let off of Soderbergh's directorial hook -- not his characters, not the audience, not this reviewer.

It's impossible to overstate the importance of sex, lies, and videotape when it burst onto the scene in 1989.

[It's] something that is intensely interesting for most of us yuppies.

I was disappointed. I think it's been overhyped and I can't understand why people rave about it the way they do.

I was impressed with James Spader's role. He seems both withdrawn and 'broken' and yet sure of himself enough to convince his female friends to confess their secrets about sex. I enjoyed the film ending as well.

Steven Soderbergh establishes himself as a mature filmmaker despite his young age in his directorial debut. Everything about this independent film is well done with specific regards to the writing and acting. Though frequent with spells of uninteresting plot, 'sex, lies, and videotape' resolves marvelously. It is an emotionally resonant portrait of the middle class, sex, and marriage.

An extremely well done sensual drama concerning a lonely, sex-shy housewife (Andie MacDowell) who is unaware that her lawyer husband (Peter Gallagher) is having an affair with her sister (Laura San Giacomo). With the arrival of a mysterious stranger (James Spader) that is thrown into their lives, each of the characters, including the stranger, begin to see everything unravel. Steven Soderbergh has made a living off of being one of the most efficient, hard-working directors in the business, and here he sports a film with a lot of indie qualities, but successfully strays from making this a pretentious exercise in sex education. Instead, he gives a lot of trust to his ensemble cast, and it pays off remarkably well, and this freedom allows James Spader to create a creepy character with a bad problem that he needs to address. There are a few loose-ends it does not tie up, including an abrupt ending, but this is mostly excellent film-making, including remarkable editing.

A film with real depth in sexual desire and repression, Soderbergh bring his A-game for his debut film. Peter Gallagher, Annie Mcdowell, and James Spader are strong in their roles when prying in others' lives. Great watch!