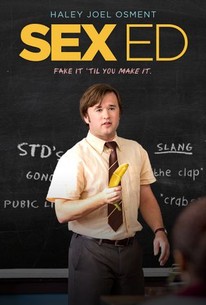 "Sex Ed" follows Eddie (Haley Joel Osment) as he lands his first teaching gig at an inner city middle school, where he quickly finds that his highly pubescent pupils are receiving no form of sexual education. Eddie isn't exactly equipped to teach them - he's a virgin. (C) Marvista

"Sex Ed" is a likable little comedy that features such a well-conceived and portrayed main character it makes up for the film's slender concept and leaps in logic.

Filthy conversations abound, mostly with a handful of trash-talking students and a series of female characters apparently conjured from a frat-boy wish list.

The shock of seeing kids talking dirty dries up quick, but the message is one of positivity and communication.

Mildly funny and about 15 minutes too long, Sex Ed has a funny cast, particularly a kid played by Isaac White, who gets some hilariously rude dialogue.

Overall, it's a sex positive film that suggests that whether you're swinging from the chandeliers or staying at home in your PJs, what really matters is what you think about yourself.

Even with considerable flaws, Sex Ed does offer a few charms, including a committed lead performance from Haley Joel Osment, whose depiction of dented dignity and comic timing supports the picture when it needs it the most.

Strained sex farce which has the tacky nerve to try and go all warm and fuzzy.

The film is sex-positive in theory, but nevertheless seems to view aggressive sexuality as the domain of the broken, creepy, and superficial.

better then expected, i expected a VOD that offered very little but it works. Odd seeing the kid of the sixth sense all grown up and he has grown into a solid actor, just needs to drop some weight

This isn't a flawless movie but this is how you make a sex comedy that's well-written, with heart and strong acting, and, most of all, portraying sex in a positive light and not just something that you do for fun and because you want to bang as many women/men as humanly possible. I'm not saying that Inbetweeners 2 should've been this film, but it could've certainly borrowed a lot in how it portrayed sex and, most importantly, its female characters. There are some strange moments here and there, but the film is well-written and I don't think it sets out to maliciously demean a group of people or what have you. While it is a corny message in the long run, the film does try to tell you that it is absolutely ok if you do not want to have sex until you feel that it is absolutely right because you've built a connection with someone special. I think it works because you're completely invested in Eddie's arc as a character, which is surprisingly strong. Perhaps it's only as strong as Haley Joel Osment's performance, which is really, really good. I think he brings the heart out of a character that, essentially, for most of the film, all he wants to do is have sex just so there's no real pressure on him because he's close to being in his mid-20s. It's an interesting idea in the sense that I do believe there's pressure on both guys and girls to have sex. In the case of women, it's almost always the men trying to get them to do something that they may not want to do under the guise of making their boyfriend happy. In the case of guys that happen to be virgins, it's the fact that people, mostly other guys, might mock them for it that affects them the most psychologically. I don't think I've seen many movies that have dealt with the pressure to have sex in a more 'mature' manner than this. And I say that with slight quotation marks because it's not like this is the Citizen Kane of sex comedies, I just say that because it does so in an intelligent manner that does not make fun of those who happen to choose to stay virgins. As far as the film's flaws, I don't think the movie is actually that funny at all. That's not to suggest the film doesn't have its laughs, because it does, it's just that it's not the most consistent and the laughs you get are never hearty. I didn't find this to be so much of a problem since I still thought the film was actually quite good. But if you're looking for a full-on sex comedy then this would really be the wrong choice, even if I would wholeheartedly recommend it. If you're a woman and you're looking for something that doesn't treat your entire gender like sperm receptacles then I would definitely recommend this movie over, say, The Inbetweeners 2 (or the first one for that matter, even if I thought it was good). While it may do so in an exaggerated manner, it also illustrates the importance of a sex ed class to burgeoning adolescent minds. Some parents may be worried about the fact that teachers they do not know are telling their kids about sex, but the fact of the matter is that the last thing most teens want to do is talk about sex with their parents. Particularly with asking questions about stuff they may be curious about. I think part of the high teenage pregnancy rates in the U.S are in part to blame on the lack of comprehensive sex ed classes. If these kids don't learn from their teachers, their parents and all they consume are sex from pornography and other types of media, of course they're bound to not take this seriously. It's just the truth. I do think the film manages to create a compelling case why this is absolutely necessary in our public schools. The movie also has a good message about sort of respecting the other person you're with and treating sex as something serious and not something that you do lightly. Surprisingly, however, they don't even come close to touching the subject of homosexuality and how that affects the entire dynamic of things. It would've been interesting to see, but it was not to be. An inconsistent film all things considered, but one I would still call good thanks to a committed lead performance from Haley Joel Osment, good writing, a good cast that certainly more than makes up for the lack of hearty laughs. A good Netflix Instant watch, that's for sure.