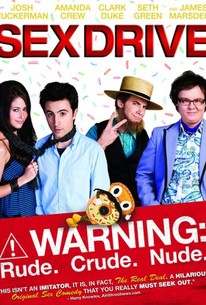 Critics Consensus: Sex Drive has some hilarious moments and is well made for a raunchy teen film, but will appeal to few beyond that demographic.

Critics Consensus: Sex Drive has some hilarious moments and is well made for a raunchy teen film, but will appeal to few beyond that demographic.

Critic Consensus: Sex Drive has some hilarious moments and is well made for a raunchy teen film, but will appeal to few beyond that demographic.

Eighteen-year-old Ian Lafferty sets out on a cross country drive with his best friends Lance and Felicia in order to lose his virginity to a red-hot babe he met on the Internet. But the journey, filled with hilarious misadventures and raunchy escapades, teaches all three more than they expected about life and love. Randy, raucous and unexpectedly romantic, "Sex Drive" follows three friends on the road trip of a lifetime!

Charlie McDermott
as Andy
View All

Little has changed since the heyday of John Hughes: nerdy hero on a mission to get laid, red sports car, bespectacled BFF- check, check, check.

It's crushingly generic stuff - a combination of gross-out gags and clammy sentiment - but Seth Green's cameo as a sardonic Amish car mechanic has its moments.

Duke has good scenes as Lance, but this is a rental, rather than a go-see.

Neither film wins a prize for visual style. Each deserves one for clever gags and zanily zig-zagging dialogue.

It is played with gusto and each of the characters avoids stereotype. It is also genuinely funny at least half of the time. The other half is a bit prurient in a style with which we are all too familiar now.

Why in the world is this essentially sweet tale of two super shy teenagers who fall in love dressed up in utterly profane fancy dress?

Sure in essence it's formula and pretty much just a romantic comedy, but [the film] is a sex fueled hilarious teen comedy/road flick...

It has its rewards, most notably a likable trio of teen characters - and a couple of wild-card sidekicks - who are given room to carve out personalities of their own.

Likeable enough, and even amusing for stretches, but ultimately too generic for a recommendation. [Blu-ray]

Okay, it doesn't have an original bone in its body, but forgetting the awful title, Sex Drive has its share of snappy lines and decent gags. It's also got Seth Green and James Marsden on cracking form, which should never be underestimated.

Although the Hughes tone in the first half slowly gives way to more predictable frattish comedy, alongside Superbad Sex Drive is one of the funniest American high school comedies in ages.

It's a keenly enjoyable celebration of teenage insecurity and - for hairy-handed teenage hordes - offers the first chance to see Amish breasts since Harrison Ford clocked Kelly McGillis in in Witness.

He's leaving virgin territory. Very good comedy! It's not exactly stunningly original, but it's still a hilarious film. The three leads do a pretty good job, Lance being a particularly funny character. Marsden and Green steal the show in all the scenes they're in, and all of the characters in the film are interesting, even if most of them are stock characters. The script is also well-connected, with most of the characters being connected to the larger plot, and combines wit, ribaldry, and straight adult humor well. Every gag sequence gets big laughs, and the comedy never slows down or dies out. The internet cut-aways are especially hilarious supplements. Although it lacks star leads and filmmakers and will probably drop under the radar, I definitely recommend Sex Drive to anyone looking for a big laughs. Ian is a high school senior in suburban Chicago, plagued by being a virgin. Online he's inflated his resume, met Ms. Tasty, and agreed to drive to Knoxville where she promises sex. He steals his homophobic, macho brother's GTO, and, with his two best friends, Lance and Felicia, heads south. Every young woman who meets Lance, including Felicia, is attracted to him, as he practices his aptly learned "Pick-Up Artist" skills. Ian, on the other hand, is a decent guy who wouldn't mind if his friendship with Felicia became a romance. By the time they get to Knoxville, they have encountered a jealous boyfriend, a menacing hitchhiker, jail birds, carjackers, an Amish community, and Ian's better judgment.

i hate how all the critics were licking this movie balls because it was like "the new improved sex comedy". ok look at the cover man. its a guy in a donut suit with a gun. i swear ive never seen that before, but does that mean its hilarious?? AND THE MOVIES CALLED SEX DRIVE PEOPLE!!! how sophistocated can it be?? Funniest scene? James Marsden destroying a garage door with his fist and head. I think smart people will realize this movie, in fact, does suck when they see a drunk amish girl run out of a barn screaming "Rum springer" and then falling (not drunk falling, just plunging downward into the ground) into cow shit, or shit from whatever animal amish people own. But im even smarter than most smart people so i knew it was gonna suck when i heard it was called "Sex Drive".

This movie was funny. I didnt know if this was going to be just another bad teen sex comedy or if it was actually going to be funny. I really liked the movie. James Marsden as Rex was hilarious and did a good job at playing the asshole older brother. The title explains whats the movie is about so if you like road trip movies then this is for you. Grade: B+