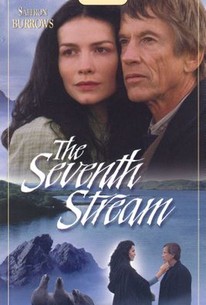 John Gray wrote and directed this 2001 television production set in a fishing village on the west coast of Ireland in 1909. The 100-minute film gives Irish folklore a new character type, a seal that becomes a lovely human enchantress. The strange metamorphosis takes place after nine days of high tide create a mysterious "seventh stream," allowing the seal to go ashore and step out of her skin. From the outset, it seems clear that the sea-born beauty (Saffron Burrows) is meant for Owen Quinn (Scott Glenn), a fisherman who continues to lament the death of his wife five years after he buried her. However, villainous Thomas Dunhill (John Lynch) steals the sealskin and hides it. According to folk tales handed down over generations, whoever possesses the skin of a seal woman becomes her master. In addition, he reaps the benefits of the good luck she brings--in whopping catches of fish. Dunhill's father (Joseph Kelly), a wise old blind man, knows all about the myth of seal women. He also knows his son is a scoundrel. One day, he moves the sealskin to Quinn's property. Soon thereafter, the woman shows up at Quinn's doorstep, and he names her Mairead and falls in love with her--and she with him. But there are complications. Mrs. Gourdon (Fiona Shaw) a local shopkeeper, has set her cap for Quinn. Also, Thomas Dunhill has been murdered, and Quinn is a suspect. Finally, according to myth, Mairead must eventually reclaim her skin and return to the sea--or die.

Critic Reviews for The Seventh Stream

Writer-director John Gray provides some very convincing dialogue, smartly on the concise side, and what carries the pic is the very realistic depiction of a village where life is hard.

Beautiful and lugubrious, like the coast of Connemara and Saffron herself.

There are no featured reviews for The Seventh Stream at this time.