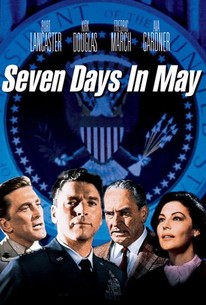 Seven Days in May Photos

In this film, General James M. Scott, convinced that liberal President Jordan Lyman is soft on America's enemies, plots a military takeover of the United States. Every effort made by President Lyman to find concrete evidence of General Scott's scheme is scuttled by political protocol, human error, and accidental death.

Victor Buono
as Bit
View All

Critic Reviews for Seven Days in May

John Frankenheimer directed, too much in love with technique, though he ably taps the neuroticism of Burt Lancaster, Kirk Douglas, and Fredric March.

As dismal as is the complication that they and this picture present, the acknowledgment of its possibility and the discovery of how it might be resolved, with wisdom and fundamental courage, make this a brave and forceful film.

I went expecting to be entertained by a tough, fast, realistic melodrama... I sat through a meandering parade of conventional TV types wandering through situations so vaguely defined that it would be charity to call them implausible.

one of the finest political thrillers ever made

...a decent hour-long thriller trapped within the confines of a bloated misfire.

It's a good, engaging movie - great-looking, too, with top-notch photography and production design - but it tends to fall apart when you start kicking the tires and peek under the hood.

Frankenheimer's Washington, D.C., less baroque than in The Manchurian Candidate but just as hazardous

Shot in stark black and white, it shows the military not as the usual buffoons, but as ruthless right-wingers with a political agenda.

Sure to keep you on the edge of your seat.

Audience Reviews for Seven Days in May

There are no featured audience reviews yet. Click the link below to see what others say about Seven Days in May!

Seven Days in May Quotes