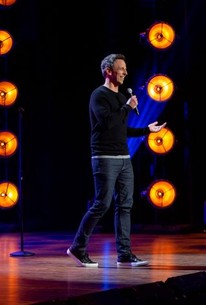 Late Night host, Seth Meyers, steps out from behind his desk and onto the stage at the Pantages Theater in Minneapolis to explain to his fans that you can love a lobby baby as much as a hospital baby...in time. In his Netflix comedy-special debut, Seth Meyers: Lobby Baby, Meyers touches upon family, fatherhood, and why you should never take your girlfriend to Paris for her birthday.

Quentin Tarantino’s Once Upon a Time in Hollywood Leads Critics Choice Awards with Four Wins, including Best Picture

It's a charming side of the comedian that we don't often get to see on late-night, though the delivery of these jokes are just as tight and well-paced as the opening monologues on his show.

Its dominant impression is of being extremely cute, in a way that usually means Aww, it's really a cute special! but which occasionally veers into something closer to a self-aware impish cutesiness.

[Seth Meyers] commands the room with pithy stories and occasionally punctuates a bit with a deer-in-the-headlights stare. His charm and consistency are both admirable, if a little dulling to his performance.

There are no featured reviews for Seth Meyers: Lobby Baby at this time.