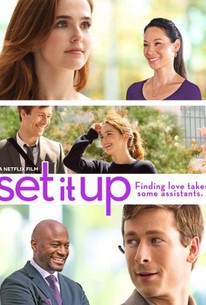 Critics Consensus: Set It Up follows the long-established outlines of the rom-com template -- and in the process, proves there's still substantial pleasure to be wrought from familiar formulas.

Critics Consensus: Set It Up follows the long-established outlines of the rom-com template -- and in the process, proves there's still substantial pleasure to be wrought from familiar formulas.

Critic Consensus: Set It Up follows the long-established outlines of the rom-com template -- and in the process, proves there's still substantial pleasure to be wrought from familiar formulas.

Set It Up Videos

Set It Up Photos

Harper and Charlie are overworked, underpaid assistants wasting their 20s slaving away for bosses who treat them like dirt and work them 'round the clock. When they realize that they would have much more free time if the people they worked for weren't single, they concoct a plan to lure their bosses into a faux-romance.

News & Interviews for Set It Up

View All Set It Up News

Critic Reviews for Set It Up

Director Claire Scanlon...gets everyone leaning into their roles, and Deutch is a particular delight.

Claire Scanlon's Manhattan meet-cute is a bouncy comedy with plenty to say about modern relationships.

It's wildly predictable and a little cheesy. And yet, it's an absolute gem of a movie.

Directed by Claire Scanlon, whose background as a comedy editor is felt in every frame of this breathlessly paced feature, Set It Up is...fine. Heck, I'll even say it's good!

Really, though, the movie is cinematic Soylent: flavorless, joyless, and devoid of any surprises. It's a testament to the film industry's years of neglect that we leave feeling full.

It's a feel-good throwback to Nineties romantic comedies like When Harry Met Sally and You've Got Mail that left me warm and nostalgic for the simple pleasure of falling in love.

As a showcase for two actors who more than deserve their moment to shine, Set It Up is hugely satisfying. As a modern romantic comedy, it's glorious.

Set it Up is the perfect example of a broad romantic comedy done right. It adheres to the formula for the most part but isn't afraid to break it. It has its own style and moves to beat of its own drum.

(Written by Amanda Keats) A fun and endearing film that feels like both a throwback to the beloved rom coms of the 90s and something new, fresh and exciting.

Set It Up's visual representation of assistant horror stories and New York City romance is a fun start to the summer for couples who want to take their date nights in.

Sara Clements
Much Ado About Cinema

It exists as a canny tribute to the rom-coms of yesteryear, hitting a sweet, nostalgic feel-good spot.

Lucy Liu is also good as an ice queen boss that gets more character development than the trope typically allows.

Audience Reviews for Set It Up

Cute. A little patchy, but I felt like something light, and this suited my mood. I liked the two leads and it was nice to see Lucy Liu in a movie again. Not the greatest if most original thing I ever saw, but I enjoyed it.

Romantic comedies fall into the category of being extremely unpredictable because there are so many of them that look generic from their trailers. It's hard to tell if they're going to be great or downright dreadful. Not that I was looking forward to one of Netflix's most recent features in Set It Up, but the cast alone is what had me giving it a chance. This was a very strange viewing experience for me, due to the fact that I would barely call it a solid movie, but I loved watching it anyways. Set It Up is actually a movie that I would recommend to most people, but would also include an asterisk. Here's why I believe it deserves your time, but also why you shouldn't expect too much. Following Harper and Charlie, as they assist their needy bosses in everyday tasks throughout the office, these two form a plan to get their bosses to fall in love with each other in order to give themselves more free time, possibly finding a relationship of their very own in the process. The premise itself is very streamlined and nothing all that interesting comes of it, so it's hard to recommend a movie that you can call every shot to as it progresses, but quite honestly, this is a movie that benefits so heavily from its two leading performers that it warrants a recommendation from me in the end. Zoey Deutch has always impressed me, from her appearance in a lacklustre movie like Dirty Grandpa or a standout role in Everybody Wants Some!!, I have been rooting for this actress to become a star, and while this movie definitely won't get her noticed, her performance is beyond likable. On top of that, Glen Powell plays off her performance in superb a surprising ways and found myself grinning from ear to ear whenever they were on screen together. If for nothing else, I can confidently say that I'd be shocked if someone complained about their chemistry here. That being said, as I mentioned before, you kind of expect where the movie ends. The one major drawback of this film is the fact that you will be predicting each scene before it happens, due to the fact that the movie moves along in a very formulaic way. That being said, I was able to forgive this movie for being wholly unoriginal because it pretty much embraces the fact that everyone's going to guess where each character ends up. Set It Up is loaded with a slew of character moments that were quite memorable, at least for myself. Even their bosses, played by Taye Diggs and Lucy Liu, had their moments to shine. Their chemistry worked for me as well. Movies like this rely heavily on whether or not you like the characters, so for that reason alone, I found myself loving my experience with this movie, but the movie itself isn't something I would say I love upon reflection. Set It Up tries very hard to differentiate itself from many other films in its genre, but ultimately fails to impress, even though the characters are very well-rounded in my opinion. From the screenplay to the direction, everything about this film feels superbly average, so if you're looking to be blown away by a great romantic comedy, then I suggest looking elsewhere. If you can accept a generic plot and simply enjoy watching some great characters evolve for 105 minutes, then I think you'll get a kick out of this move like I did. Set It Up is a movie that'll probably be forgotten when this year comes to a close, but I think it deserves a little more than that.

Set It Up Quotes