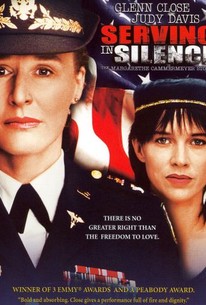 Glenn Close won the "Outstanding Lead Actress" Emmy for her performance in this made-for-television drama about the rights of homosexuals in the military. Close stars as Colonel Margarethe Cammermeyer, an Army medical officer with an eye on a promotion who is suddenly tossed into discharge proceedings after admitting to being homosexual. The film shows how she fought the system with the help her family and the support of gay rights activists. Judy Davis stars as her lover and also won the Emmy for "Outstanding Supporting Actress." Barbra Streisand was among the executive producers and the film was nominated for several Emmy and Golden Globe awards.

Critic Reviews for Serving in Silence: The Margarethe Cammermeyer Story

There are no critic reviews yet for Serving in Silence: The Margarethe Cammermeyer Story. Keep checking Rotten Tomatoes for updates!

Audience Reviews for Serving in Silence: The Margarethe Cammermeyer Story

It's still relevant and tackles the same issues still faced 20 years later but for me, this movie just toddles along slowly without any real purpose, carried by the wonderfully talent Glenn Close.