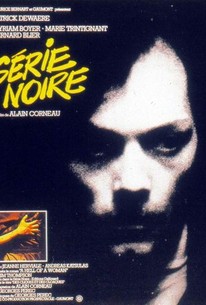 The title Série Noire refers to a popular French mystery series, and literally means "Black Series." The story is based on American author Jim Thompson's hardboiled detective story A Hell of a Woman, and is close in spirit to the U.S. film noir mysteries of the 1940s. Frank Poupart (Patrick Dewaere) is a 30-year-old loser, a salesman who is barely scraping by, whose wife has just left him "just to think things over." He meets Mona (Marie Trintignant), a quiet, dreamy 15-year-old girl whose aunt has offered her to him for his sexual pleasure in return for a sweater. They become lovers, and both of them see a way out of their impoverished dead-end existence when Mona tells him that her aunt (who is also her landlady) has a large stash of money hidden away. They decide to kill her, and also kill a Greek boxer who owes Frank money, making it look like a murder/suicide. When Frank's wife returns to him, eager to begin their marriage again, he kills her out of sheer frustration. Later he is blackmailed by Staplin (Bernard Blier), his employer, and is left with no loot, no wife, three heinous crimes on his hands, and a clueless adolescent girlfriend. ~ Clarke Fountain, Rovi

Jeanne Herviale
as The aunt

Among the best big-screen interpretations of Thompson's bitter tales.

A satisfying slice of sleaze served up on celluloid, Série Noire is a deliciously good watch.

That line between self-appointed Atlas and desperate man that can't see his own shadow is one that Dewaere's Franck walks and frequently trips over in Série Noire.

There are no featured audience reviews yet. Click the link below to see what others say about Série Noire!