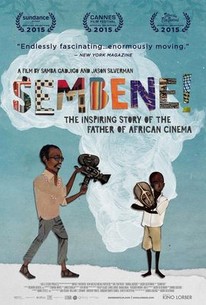 To speak of African cinema is to speak the name of Ousmane Sembene. Known as "the father of African film," this was no easy title to bear, as shown in this personal essay about one of the world's greatest artists. Sembene! takes you from Dakar, Senegal, to the docks of Marseille, France, to New York City. In a career spanning 40 years, Sembene tasted the highs and the lows, only to re-invent himself with a powerful blend of documentary, French New Wave, and Realism, creating films that shocked the sociopolitical power structures of the day. Classics like Xala, Black Girl, and Moolaade established his cinematic vision and made him an international emissary who presented the inner lives of his people on film. Told by those who knew him best and with fascinating archival interviews, Sembene! constructs a revealing portrait of a curious, cantankerous, and deeply intellectual artist. Sembene promoted a new vision of Africa, and his films injected that vision into the world. Sembene! is a testament to the power of story, highlighting how it can plant a seed of thought that crosses generations.

Majors in the Senegalese's trailblazing; most notably the fact that he was responsible for the first film shot by a black African.

A richly crafted documentary that serves as an enlightening tribute to the filmmaker who masterfully tapped into the medium's wide-reaching socio-political potential.

For a filmmaker who believed in giving Africans their own voice, it seems appropriate to offer such an unvarnished portrait.

Each time we see an image of Sembene with a camera in this documentary, it still feels like a revolutionary statement.

Mr. Sembène was an inspiration; as a film, "Sembène!" is something less than that, petering out as it goes on, but at least offering a fair-minded tribute to a master.

The remarkable career of Senegalese filmmaker Sembene Ousmane gets an appropriate overview in this intelligent, slightly dry doc.

The material is fascinating, particularly with Sembène the first African to make a film in Africa for an African audience.

Sembene! is too dry and formal to be lovable, but it makes its point emphatically, paying tribute to a filmmaker whose pugnaciousness was both a gift and a curse.

A useful and entertaining overview of Sembène's life and career

...honors the Senegalese novelist and director Ousmane Sembene, who is often called the father of African cinema,

A rich, engaging portrait not only of Africa's great filmmaker, but also of the course (and necessity) of influence, including co-filmmaker Gadjigo's journey while discovering more about the life and work of his late friend.

There are no featured reviews for Sembene! at this time.