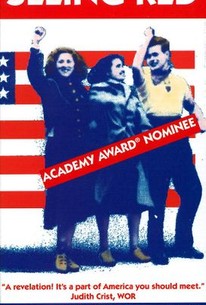 About 400 known and unknown American communists were interviewed during this five-year documentary project, and the results culled down to an intriguing 100 minutes of screen time. As secretaries, factory workers, farmers, and intellectuals discuss the past, their insights provide both humor and pathos, but most of all, the interviewees emerge as human beings whose main interest has remained in lowering the gap between the haves and have nots. The documentary notes that as a result of leftist agitation, the United States adopted programs like Social Security and unemployment insurance faster than otherwise -- programs that were once labeled communist by American conservatives. Committed to defending human and civil rights, the 1,000,000-member American Communist Party lost more than half of its members when Stalin's inhuman purges were made public. Perhaps the most interesting aspect of these interviews, which also included people like Pete Seeger, is the change in attitudes during the 1960s and '70s and the fact that some members of the Communist Party refused to be interviewed because they were afraid of repercussions if their affiliation were made public. These repercussions had taken many forms in the past, including the loss of jobs as in the McCarthy era.

A vivid and long-overdue record of a "tradition of radicalism that we are part of today."

This Oscar-nominated douc offers a sympathetic portrait of American communists (mostly of the past but also some of the present) by New Left directors as a tribute to Old Left politics; it's also entertaining due to testimonies by Reagan and others

There are no featured reviews for Seeing Red: Stories of American Communists at this time.