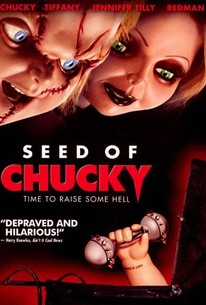 Critics Consensus: Give Seed of Chucky credit for embracing the increasing absurdity of the franchise -- even if the end results really aren't all that funny or entertaining.

Critics Consensus: Give Seed of Chucky credit for embracing the increasing absurdity of the franchise -- even if the end results really aren't all that funny or entertaining.

Critic Consensus: Give Seed of Chucky credit for embracing the increasing absurdity of the franchise -- even if the end results really aren't all that funny or entertaining.

When the notoriously evil Chucky doll and his lover gave birth, they had no idea that their spawn would grow up to be a peace-loving kind of guy; however, that's exactly what Glen turns out to be: a gentle soul who is horrified at what he has been told about his family. After hearing the news of a film being made about his parents' murderous legacy, Glen sets off for Hollywood, where he promptly brings Chucky and Tiffany back to life. Far from diving into doting fatherhood, Chucky is seriously disappointed in his son's lack of inherent evil and tries his best to impart his vast knowledge of all things malevolent before Glen becomes some sort of do-gooder. Elsewhere, Tiffany finds that she will be played by Jennifer Tilly in their movie and doesn't hesitate to let her son in on their family's most cherished tradition -- killing sprees. Directed by Don Mancini, Seed of Chucky features Brad Dourif returning as the voice of Chucky, while Tilly plays both herself and Tiffany. The offspring of the evil pair, Glen, is voiced by Lord of the Rings star Billy Boyd. Cult film director John Waters also makes an appearance, as does hip-hop artist Redman.

Jennifer Tilly
as Herself, Tiffany

Tony Gardner
as Himself

Brad Dourif
as Chucky
View All

News & Interviews for Seed of Chucky

View All Seed of Chucky News

Critic Reviews for Seed of Chucky

By far, the most shocking carnage is Tilly carving up her persona. What a doll.

The film mostly shoots blanks; it's less than the sum of its in-jokes.

There is not a single scary moment in all of Seed of Chucky, so its laughs are welcome, though most of the humor falls flat.

Were there an award for most bizarre and dispiriting comedy-horror hybrid featuring killer dolls, the latest installment in the Child's Play series would have it locked up.

Little tip for Don Mancini, creator of Chucky the killer doll and writer-director of Seed of Chucky: Don't make jokes about Ed Wood -- the 'worst director in the history of Hollywood' -- if you can't do better.

A tip of the hat to Ed Wood's 1953 Glen or Glenda, which is a masterpiece in comparison to this cheesy dreck.

The movie quickly implodes like an over-inflated plastic sex toy. Still, if you have been following this low-budget franchise, this is going to be essential viewing.

There is one thing that cannot be denied or ignored or downplayed: Jennifer Tilly gives every inch of herself to this movie.

It's clear that the "Child's Play" series is dead and buried...

Though saddled with as egregiously silly a feel as its immediate predecessor, Seed of Chucky nevertheless comes off as a somewhat superior sequel...

A gutbucket farce that works better as a lampoon of Hollywood than as a horror movie.

Seed of Chucky is still a great follow-up to Bride and a very cool horror/comedy on it's own.

Audience Reviews for Seed of Chucky

The script continue to be poor and amateur, but Seed of Chucky is great to watch. Very funny entertainment with a new interesting character: Glen (the title character), that present surprising question to his parents. Brad Dourif as Chucky, continue to make a great acting voice to this movie.

This film makes no sense. The reason each character in this film returns is all kind of cynical and really got on my nerves throughout the picture. I honestly cannot find much about this film that I enjoyed rather than a few funny moments with their offspring "Glen or Glenda." "Seed of Chucky" has no idea what kind of film it wants to be and it is not scary even in the slightest. I felt like I was watching a dark sitcom about a family of dolls who murder people. This is not what a Chucky movie is supposed to be, nor any horror film for that matter. In the end, I will, as will everyone, forget about this film entirely, or just enough to explain to people how bad it is. It's not the worst Chucky instalment, but it's pretty damn bad.

Chucky: What's so great about being human? You get sick! You get old! As a doll, I'm infamous! I am Chucky! The killer doll!  "Fear The Second Coming" Seed of Chucky is such a bad movie. What was once a good idea for a fun spoof is now devoid of anything cool or original. Sure, their still using the initial idea. Their spoofing the slasher genre by using killer dolls. There's tons of references to films like Psycho and The Shining; but the major film spoofed here is Glen & Glenda. Why you would want to spoof an Ed Wood movie is beyond me, but the result is Seed of Chucky, and that is not a good thing at all.  I liked the original, but by now the franchise had grown dull and lifeless. This film tries to be funny, and maybe it will get a few chuckles out of you. On the whole though, it is just a waste of time. The movie is obvious and seems like it was written by a fucked up twelve year old. You can feel how the director tried to pull a full length movie out of content that didn't deserve it. It comes in at a whopping 80 minutes, and even with such a short runtime; it feels stretched out and overlong.  Seed of Chucky is more annoying than it is clever. The initial idea for the original worked because of the cleverness of the character. What happens when you extend the life of any horror film character, is that the initial cleverness is lost and all of the characters traits become predictable norms. This movie isn't worth your time. You may have really liked the first couple and maybe you were able to bear "Bride", but this one just pushes the franchise off of a cliff.