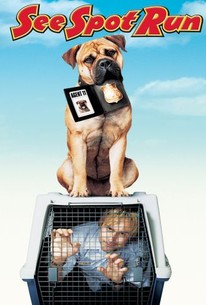 Critics Consensus: See Spot Run has all the elements chidren enjoy in a movie: a lovable dog, bad things happening to stupid adults, and lots of dog poop. For adults, it's either hit-or-miss.

Critics Consensus: See Spot Run has all the elements chidren enjoy in a movie: a lovable dog, bad things happening to stupid adults, and lots of dog poop. For adults, it's either hit-or-miss.

Critic Consensus: See Spot Run has all the elements chidren enjoy in a movie: a lovable dog, bad things happening to stupid adults, and lots of dog poop. For adults, it's either hit-or-miss.

A police dog finds himself pitted in a battle of wits against an accident-prone mailman and a gang of crooks (and it looks like the dog has the edge in the brains department) in this broad comedy. Agent 11 (Bob) is a bulldog trained by the FBI agent Murdoch (Michael Clarke Duncan) to sniff out drugs, and the dog's keen nose ferrets out the storage facility of Mafia kingpin Sonny (Paul Sorvino); Agent 11 has also been taught to show no mercy with criminals, and he gives Sonny a serious bite in a rather personal place. Needless to say, Sonny is not amused, and wants revenge against the pooch, so Agent 11 is put into the animal equivalent of the witness protection program. However, unlikely circumstances set the dog loose, where he soon pairs up with Gordon (David Arquette), a stunningly inept letter carrier with a long history of fending off ill-tempered pets. Gordon is attempting to impress Stephanie (Leslie Bibb), an attractive single mother, by helping to look after her son James (Angus T. Jones), and when he comes across Agent 11, he adopts the dog and names him Spot, feeling certain he can smooth out the critter's often cranky relationship with people. But Gordon doesn't know that Sonny and his henchmen are hot on Agent 11's trail and that his new best friend will lead a gang of ruthless gangsters into Stephanie and James' home. See Spot Run was originally announced as a vehicle for comedy star Martin Lawrence, but when changes in Lawrence's schedule prevented him from taking on the project, it was retooled for the talents of David Arquette.

Adults will find little to entertain them, but at least it's not an ordeal to sit through.

There are eight credited writers on this rapidly paced jumble of a movie, which could be a record. (You have to wonder: What movie titles did this octet of high foreheads reject?)

It is possible, in fact highly probable, that the writers of this movie are as idiotic as the fat-headed lead character on screen.

See Spot Run, the new movie starring David Arquette is no good. It stinks, it's stupid, it's not funny.

The perpetrators of See Spot Run want you to know who in this brutally dumb canine comedy is the idiot. David Arquette aside, depending on how long you stick around, it might be you.

Too dumb and too vulgar for anyone.

Only young Jones and the dog come out of it with their reputations intact.

A messy, though mostly amiable, comedy that can't quite decide who it wants to entertain.

This crowd-pleaser is filled with laughs.

The plot is so ridiculous and the execution so poor that nothing can save this floundering mess.

David Arquette is a mailman who wants to go out with a hot girl in his block. He ends up looking after her son while she is on a business trip.

A brief review as this was one that just happened to be on TV. David Arquette is one of those Actors (I feel) who is where he is because of his family name and not his talent, thus making him pretty annoying to watch. One of those cute films, with boy, dog and the good looking Mum, well you can work out the rest of the story from that.

I grew up on this movie, and I have to admit that this film sure is a fun film! All ages should enjoy this film. I know I do, and I will never stop. To me, this movie can't ever get old. It will always have those few funny moments that will have me laughing!

In "See Spot Run," David Arquette stars as a bewildered mailman named Gordon who unwillingly runs into and starts keeping a dog named Spot, while also babysitting the son of the woman (Leslie Bibb) he has a crush on. Little does Gordon and the boy know that Spot just happens to be an FBI dog with a nose for mischievous people. Ok, let me start by saying that the rumors you've probably heard by now are true. "See Spot Run" is TERRIBLE plot-wise, script wise, and so on. Parts, such as the story, are so terrible that some people might give up on it before they even finish watching it. Luckily for myself, I don't put most of the emphasis on a movie's script, story, etc., when I'm watching it and giving it my thoughts in a review. I mainly judge movies, especially comedies, by how entertaining they are. "See Spot Run" has a bunch of parts that are simply hilarious. Whether Gordon is getting too familiar with a slop of dog feces or a zebra causes an explosion, "See Spot Run" is hilarious. If you like comedy films just as long as they're funny, then I recommend getting "See Spot Run." NOTE: That was my Amazon review from the year 2001....wow, this movie's THAT old!??