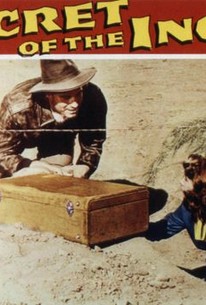 Before Indiana Jones there was Harry Steele (Charlton Heston), an idealistic archaeologist determined to return an ancient Incan mask to the society from which it came. A greedy con-artist (Robert Young) has other ideas, though, and the two men race to fund an expedition to find the treasure, which has reportedly been buried by Spanish conquistadores somewhere in Machu Picchu. The con-artist (Young) seduces a beautiful tourist in order to reach his goal, leaving Steele (Heston) to locate the site through more honorable means. Twenty-seven years before directors George Lucas and Steven Spielburg collaborated to create Indiana Jones: Raiders of the Lost Ark, Jerry Hopper directed Secret of the Incas.

Kurt Katch
as Man with Rifle

Critic Reviews for Secret of the Incas

There are no critic reviews yet for Secret of the Incas. Keep checking Rotten Tomatoes for updates!

Audience Reviews for Secret of the Incas

The template for Indiana Jones turns out to be cribbed from earlier adventure movie sources (like Tarzan, for instance), surprise. Charlton Heston is a Yankee adventurer overseas (down Peru way) strictly to make his fortune, looking for lost Inca gold, romancing lonely tourist wives and only a little above all around asshole until he meet Nicole Maurey (who's little better as it turns out). The character arc has both change their jaded ways by the time the credits roll with most of the action focused on the natives dutifully honoring their lost culture, Yma Sumac doing a Mariah Carey with her vocal talents. She gets 3, count 'em, 3 songs no less. Could use a bit more salt and pepper.

Secret of the Incas Quotes