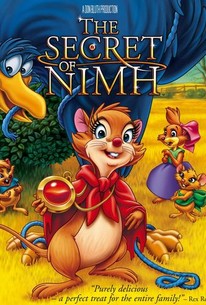 Critics Consensus: The Secret of NIMH is a dark, well-told tale that respects its young audience enough to not tone down its subject matter.

Critics Consensus: The Secret of NIMH is a dark, well-told tale that respects its young audience enough to not tone down its subject matter.

Critic Consensus: The Secret of NIMH is a dark, well-told tale that respects its young audience enough to not tone down its subject matter.

The Secret of NIMH Photos

Frustrated with the Walt Disney studio's reluctance to produce full-length animated films, Don Bluth and a number of animators left the studio in the early '80s with the intent of creating movies in the style of Disney's classics. The Secret of NIMH is the first film Bluth produced after leaving the studio. Adapted from Robert C. O'Brien's acclaimed children's book Mrs. Frisby and the Rats of N.I.M.H., the film is about a widowed mouse whose home is threatened; also, one of her children is gravely ill. On her way to find help, she discovers NIMH, a secret society of highly-intelligent rats who have escaped from a nearby science lab. The rats help the widow to protect her family and home. ~ Stephen Thomas Erlewine, Rovi

News & Interviews for The Secret of NIMH

View All The Secret of NIMH News

Critic Reviews for The Secret of NIMH

Don Bluth, who led an exodus of animators from Walt Disney Productions three years ago, has produced a feature in the Disney tradition: Full animation, spectacular effects, rounded characters.

Bluth and his animators, bless them, chose to revive an endangered art form -- classically detailed animation. They drew their characters exquisitely and gave them individual personalities.

Not enthralling, but worth seeing for anyone interested in the mechanics of this arcane art.

Every character moves fluidly and imaginatively against an extravaganza of detailed background and dazzling effects, all emboldened by fascinating colored textures.

It is something gorgeous to look at.

The animation was, as Bluth and company had promised, a spectacular return to old-school craftsmanship.

Don Bluth's debut film has mixed results. It is complex and surprising, but also boring. [Full Review in Spanish]

They're some of the most well-developed characters in all of animation.

Aside from its title, there's no secret about it: The Secret of NIMH is exciting, engaging, and often magnificent to look at.

The award-winning book had a pretty crackerjack story to begin with, but in some respects, I think Bluth and his co-writers have bettered it.

Audience Reviews for The Secret of NIMH

though many consider this Don Bluths best film, I still don't think he is the best animation director. The animation is okay, but its not that impressive, not as much "Anastasia." The acting is okay but not fantastic, but the music is very good, and some of it is very good when it comes to its drama, but it doesn't leave you completely satisfied like some other serious animated films do like "Persepolis" but overall it is a decent film, but its not the best film or the best animated film I've seen.

The Secret of NIMH features gorgeous, detailed animation and a delightfully dark nature. It is well constructed, occasionally thrilling, visually dazzling---and also mysterious and haunting (rare for an animated film). What really makes the film a triumph is its ability to perfectly convey O'Brien's masterful work--especially via the expressive characters--and fully capture our attention and wonder as we willingly follow Ms. Brisby along her exciting adventure. Where it falls short is in its slow beginning, abrupt ending, and some moments that drag. However, these flaws--while keeping it from being a perfect masterpiece--are then undone by the beauty that makes up most of the film.

Don Bluths directorial debut and his best film. The animation is amazing, especially when considering it was done by twelve animators. The story is just as amazing as the audience follows Mrs. Brisbys journey to save her son. Their are many scary and intense scenes in this movie, but Mrs. Brisbys courage and optimism keeps the tone of the film in balance. Probably the only time Don Bluth succeeded in maintaining that balance. An emotionally powerful film that kids and adults can enjoy.

An interesting animated film, the story is actually pretty grown up for a Disney movie, and I'm not sure that was a good idea, but overall it's a pretty good movie.

The Secret of NIMH Quotes