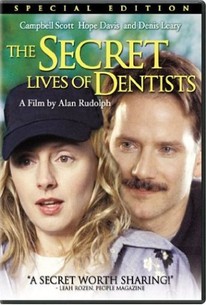 Critics Consensus: A witty and honest look at marriage in decay.

Critics Consensus: A witty and honest look at marriage in decay.

Critic Consensus: A witty and honest look at marriage in decay.

The Secret Lives of Dentists Photos

A gentle man suddenly finds himself at a loss for what to do when he suspects his wife has been unfaithful in this comedy drama from director Alan Rudolph. David and Dana Hurst (Campbell Scott and Hope Davis) are a married couple with three children who also happen to be dentists who share an office. David is a quiet and reserved sort, while Dana has been quietly but obviously unhappy with things recently. Backstage at a community theater production, David sees Dana in the arms of another man and is immediately certain she's having an affair, a suspicion only deepened by her continued dark mood, long periods of silence, and frequent trips out of the house. Slater (Denis Leary) is a disgruntled patient of the Hursts who has gone public with his unhappiness over their work; as David tries to work out Slater's differences, Slater becomes a frequent (and not always welcome) visitor in David's home. As he observes the obvious tension in David and Dana's relationship, Slater begins offering his own gruff brand of advice to David -- including acting cooler and informing Dana "I could kill you" at the dinner table. Co-produced by leading man Campbell Scott, The Secret Lives of Dentists was based on the novel The Age of Grief by Jane Smiley.

Susie Essman
as Nurse
View All

Critic Reviews for The Secret Lives of Dentists

Rudolph's fondness for angular, oblique characterization is ideally suited to the movie's incidental story of sublimated feelings and contradictory impulses.

Domestic scenes with the kids are drawn with letter-perfect naturalism.

There are movies that have a way of hitting you at a certain time in your life, and this study of being married with young children speaks in satisfying ways.

It's funny, honest enough to make you squirm and a film that may make you feel a little bit of the pain on the other side of that shrieking drill.

Rudolph's past work has been spotty, but his stress here on familial sovereignty is moving, as is his direction of the three children.

A faultlessly constructed, artistic look at love, loss and truths we can't ignore.

A profound study of lack of communication in a marriage with some great performances from Scott, Davis, and Leary.

One of those quietly brilliant indies, so small in scope that it takes a little extra attention to appreciate how deeply it plunges into its characters.

The Secret Lives of Dentists is a provocative title, promising much more than this domestic melodrama is able to deliver.

...[T]he potency is abrogated by Rudolph's indulgent pretension of including Scott's personified conscience in the form of an obstreperous patient...

Funny but not a comedy, slow but not plodding, narrow in scope but not uninteresting.

Audience Reviews for The Secret Lives of Dentists

Not too popular on the fan metre but I actually enjoyed this film.There is a nice natural feel to the characters brimming with honesty.

The Secret Lives of Dentists Quotes