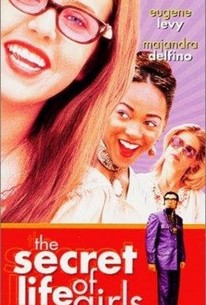 Yet another teenager discovers how difficult growing up can be in this comedy-drama. It's 1973, and 15-year-old Natalie (Majandra Delfino), shy and bookish, is caught in the emotional crossfire at home when her hippie-ish mom, Ruby (Linda Hamilton), discovers that dad, Hugh (Eugene Levy), a psychology professor at a local college, has been having an affair with one of his students. Natalie is having problems of her own, of the "boys don't make passes at girls who wear glasses" variety, which is not helped very much by her friend Kay (Megan Good), who is pretty enough to have already caught the attention of several good-looking boys. However, much to Natalie's surprise, one of Kay's new flames starts giving her the eye, and appears to like what he sees. The Secret Life Of Girls was the directorial debut for screenwriter Holly Goldberg Sloan, whose previous credits include the remakes of Angels In The Outfield and Mighty Joe Young.

Tommy Parada
as Frat Member No. 1

Andrew Stone
as Patrick
View All

Critic Reviews for The Secret Life of Girls

There are no critic reviews yet for The Secret Life of Girls. Keep checking Rotten Tomatoes for updates!

Audience Reviews for The Secret Life of Girls

To be honest, a little too over the top to be particularly convincing. The whole family were like caricatures. The one thing that makes this worth watching is Majandra Delfino. She is the one believable character and she really has a quality that keeps you watching. Between her singing and acting, it staggers me that she is not more successful. The 70's setting also works. The movie has its moments in between the weak bits and hammy acting, but I couldn't seriously recommend it.

A great movie! The first time I seen this movie I was a bit skeptical about it, due to the fact that Linda Hamilton and Eugene Levy were in it. But, it actually worked pretty well because Majandra Delfino was the star of this movie. This is her character's story, and she is adorable! One can't help but bond within her plight as she is embracing and dealing with various issues in her life. It's absolutely great, and the music-brilliant!

The Secret Life of Girls Quotes