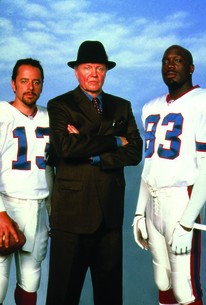 This made-for-cable "feel good" picture begins with a "feel-bad" moment, as the entire first-string offensive squad of the Buffalo Bills football team falls victim to food poisoning. With no other option, the Bills' ulcerated coach Ditcher (Jon Voight) must rely upon the team's second-string benchwarmers. Among these also-rans are aging reserve quarterback Dan Heller (Gil Bellows), a longtime thorn in Ditcher's side, and overeager but undertalented wide receiver Gerry Fuller (Richard T. Jones). Miraculously, Heller, Fuller and the rest of the misfits pull themselves together to the extent of qualifying for the playoffs--and, eventually, the Super Bowl. A veritable feast of sports-movie cliches and strenuous overacting, Second String first aired December 18, 2002, over the TNT cable network.

Doug Flutie
as Himself

Mike Ditka
as Himself

Chris Berman
as Himself
View All

There are no critic reviews yet for Second String. Keep checking Rotten Tomatoes for updates!

There are no featured reviews for Second String at this time.