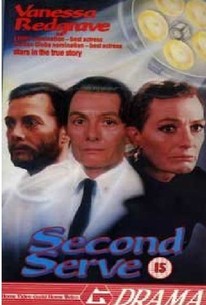 Second Serve is that rare TV movie which refuses to sensationalize its so-called "sensational" material. This is the true story of Richard Raskind (here named Richard Radley): Yale grad, Naval officer, brilliant surgeon and tennis champ. What Richard has successfully hidden from practically everyone is the fact that he feels like a woman trapped in a man's body. In 1975, he goes so far as to endure a sex-change operation, emerging as Renee Richards. The film is not so much about this "alteration" as its ramifications, particularly the fierce opposition from the US Tennis Association when Renee wants to qualify as a female pro player. Rather than cast two actors to play the "before and after" protagonist, Vanessa Redgrave plays both Richard and Renee. While it's no great shock to see Ms. Redgrave with short hair, her performance as a man in Second Serve is the sort of work for which the phrase "tour de force" was coined.

Richard Venture
as David
View All

The movie, for all intents and purposes, should not work. And yet it wholly and completely does.

There are no featured audience reviews yet. Click the link below to see what others say about Second Serve!