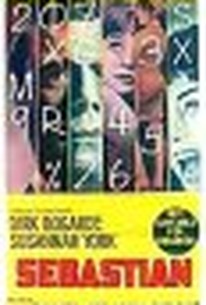 Sebastian (Dirk Bogarde) is an undisciplined mathematics genius who works in the "cipher bureau" of the British government. While cracking enemy codes, Sebastian finds time to romance co-worker Susannah York. The film dwells upon Sebastian's rather lax morals (even by 1968 standards), culminating in his refusal to commit himself to York once he's rendered her pregnant. This aspect of the story is frankly more fascinating than the main espionage plotline. Keep an eye out for Canadian actor Donald Sutherland in a bit as an American. ~ Hal Erickson, Rovi

John Gielgud
as Head of Intelligence

Donald Sutherland
as American
View All

What we are stuck with, then, is a movie that moves confidently in three directions, arriving nowhere with a splendid show of style.

The put-on, of course, consists in never really letting the audience know what level of seriousness the film is at, and the movie itself sometimes seems unsure.

Inventive and amusing, but never really rising above the norm for long.

For a time this looked as though it may become a character study of a man, an examination of an intellectual in a pursuit that a machine might do better. But in that direction it never quite jells -- nor in any other.

Sebastian is wayward, a bit too consciously out to please, but enjoyable precisely because it never comes too close to defining its own terms.

"Sebastian" is a curious clash of story elements, mixing an unlikely romance with the trendy spy genre. The always compelling Dirk Bogarde is the title character, the enigmatic star of a British agency devoted to Cold War code-breaking. For mysterious reasons, his support staff is entirely composed of attractive, fashionable women. His job interviews dwell on offbeat tests of mental dexterity like "Spell your name backwards" and "How many words can you make out of 'thorough'?" Sebastian meets his match when he hires clever Rebecca (Susannah York). He already has a girlfriend (Janet Munro), a has-been singer, but their relationship is on the wane. Naturally, Sebastian struggles to hide his affair with Rebecca from their co-workers, his boss (an underused John Gielgud) and an intrusive security officer (Nigel Davenport). What's most peculiar is that the decoding aspect never becomes essential to the plot. One would expect some individual document to become a central crisis, but this doesn't happen. Coding issues remain in the background, and no message's content is ever revealed. If the story were about two people who shared a love of crossword puzzles, it wouldn't be much different. The focus turns to the budding relationship between Sebastian and Rebecca, yet Sebastian has such a distant personality (Asperger's Syndrome, anyone?) that his interest in her is barely plausible. His mind never stops gnawing on the permutations of letters and numbers that rule his workday. Pop-culture fans will enjoy the snazzy Jerry Goldsmith score, along with some Morse code-like electronics from Delia Derbyshire (best known for work on the "Doctor Who" television series). There is one stylish nightclub scene, plus the obligatory '60s-era sequence where sound effects and woozy cinematography convey a drugged character's altered perception. And the opening credits are strangely reminiscent of an '80s video game, years in advance. The young Donald Sutherland makes a brief but meaty appearance.