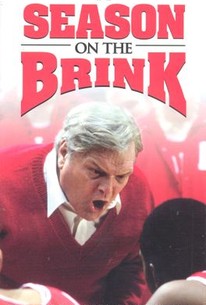 One of the most unabashedly profane (albeit honest) TV movies ever produced for "basic" cable, A Season on the Brink is based on John Feinstein's book about the 1985-1986 Indiana Hoosiers' basketball season. Brian Dennehy heads the cast as the controversial, combative, chair-tossing Hoosiers coach Bobby Knight, whose motto is "The only two words you need to know to play basketball at Indiana: Yes, Sir!" Driving his players mercilessly, and making verbal mincemeat of fans and reporters alike, Knight isn't interested in winning any popularity contests -- he is only interested in winning games, which he does with intimidating frequency. Along the way, Knight's abrasive style has profound effects on two of his best players, Daryl Thomas (Michael James Johnson) and Steve Alford (James Lafferty) -- not to mention Bobby's assistant coaches and family members. Videotaped footage of actual games is incorporated into the dramatized re-enactments, with mixed but generally effective results. A Season on the Brink was simulcast over ESPN and ESPN2 on March 10, 2002, with the original TVMAL-rated version airing on the former service, and a "laundered" TV14LV-rated version running on the latter channel.

Digger Phelps
as Himself
View All

Critic Reviews for A Season on the Brink

Hoosier coach Knight's media profile has been so high for so long, his portrait is complete; Season on the Brink fails to build on that media-created persona.

A Season on the Brink is a movie on the brink, as it ploddingly follows Knight and his Hoosiers during the 1985-86 season.

Feinstein's source book provides sufficient detail to humanize the controversial coach and explain his philosophy, but ESPN goes for the cheap shot instead and doesn't even reach the rim.

Audience Reviews for A Season on the Brink

There are no featured audience reviews yet. Click the link below to see what others say about A Season on the Brink!

A Season on the Brink Quotes