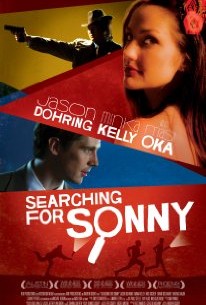 SEARCHING FOR SONNNY is a hilarious comedy that follows reunited friends, Elliott (Jason Dohring), Calvin (Nick Kocher) and Eden (Minka Kelly), who find themselves chief suspects in a murder mystery at their ten-year high school reunion. Ironically, the events surrounding the disappearance of their friend Sonny (Masi Oka), is reminiscent of a high school play they once performed, coincidentally written by Sonny himself. Deception leads to scandal and the truth surfaces as the friends learn that shady businessmen and school officials are involved in a complex scheme of money and murder.

Clarke Peters
as The Narrator

Critic Reviews for Searching For Sonny

Searching for Sonny is a masterclass in how NOT to make a mystery. Or a comedy, for that matter.

There are no featured reviews for Searching For Sonny at this time.