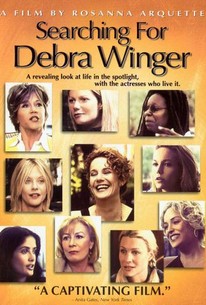 Directed by actress Rosanna Arquette, this candid documentary is not only about the iconoclastic and somewhat reclusive film star Debra Winger (who does not even appear onscreen until an hour into the film), but also about the trials and tribulations of actresses in Hollywood who have reached "that certain age." In the course of her "search," Arquette interviews several of her colleagues, among them Whoopi Goldberg, Diane Lane, Teri Garr, Holly Hunter, Vanessa Redgrave, Charlotte Rampling, Meg Ryan, and Sharon Stone, all of whom have their own personal horror stories about insensitive producers and casting directors who tend to think of over-40 (and sometimes over-30) actresses as being suitable only for mother, "other woman," and "hero's girlfriend" roles -- when they bother to cast these actresses at all. The women also discuss the difficulties in balancing a successful career and a private life. Test-marketed on the film festival circuit throughout 2002, Searching for Debra Winger received its largest audience when it aired over the Showtime cable channel on August 18, 2003.

tableaux of the damned

No real structrual form which weakens this doc but what several of the actresses have to say is interesting. Not great but a good try.

I really loved this documentary. Rosanna asks her peers if it is possible to balance work and a personal life and why aren't there better roles for women 30+. She interviews a great group of actresses including; Salma Hayek, Vanessa Redgrave, Meg Ryan, Jane Fonda, her sister Patricia Arquette and many more. Their responses were very intelligent and interesting. Part of the reason I rate this documentary so highly is because you could take almost anything that is said and apply it to any North American woman. Rosanna Arquette is very natural when she turns the camera on herself. She doesn't oversell herself, so you don't get the sense this project is a product of self-aggrandization, which is very important. It isn't even an attempt to stroke the egos of her fellow actresses (though it is obvious she admires them.) There are some really honest moments, which I didn't expect.

A pretty cool documentary about women in Hollywood.