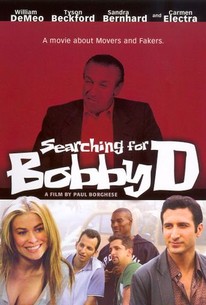 A frustrated New York actor whose sick of being typecast due to his Italian-American heritage sets out to seek help from the one actor who could provide his big break in a satirical showbiz comedy starring William DeMeo, Carmen Electra, Sandra Bernhard, and Tyson Beckford. Johnny Argano is Brooklyn born and bred. Though he's confident that he has the skills to make a name for himself on the big screen, he resents the fact that casting directors only seem to select him for stereotypical roles. In Johnny's eyes, the only way to break the vicious cycle of typecasting is to get the attention of his screen idol Robert De Niro, and in order to make that happen Johnny will have to pen a screenplay that truly stands apart from the pack. With his career on the line and nothing left to lose, the frustrated actor gathers together a dedicated team of die-hard filmmakers to raise the money they need to get their film made, and convince the star of Taxi Driver and Raging Bull to accept a starring role in the movie that will make them all famous.

There are no critic reviews yet for Searching for Bobby DeNiro. Keep checking Rotten Tomatoes for updates!

There are no featured audience reviews yet. Click the link below to see what others say about Searching for Bobby DeNiro!