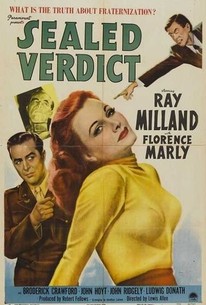 In this wartime drama, an American officer is accused of secretly working as an SS man. Though all evidence is against the officer, one Army prosecutor is not convinced of the man's guilt and begins working to prove his innocence. He is assisted by a beautiful woman who knows the defendant is innocent. Along the way the lawyer and the woman must endure constant assaults and accusations of treachery, but in the end they prevail.

The same settings of the ruined city, the same handsome uniforms, give the watcher the impression that Marlene Dietrich is going to stroll out from behind the nearest heap of rubble.

There are no featured reviews for Sealed Verdict at this time.