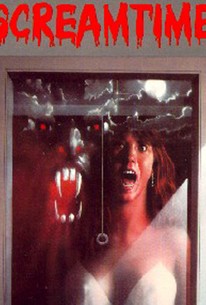 Three purloined video tapes create all sorts of problems for the two teens who stole them in this horror trilogy that was originally made for television. The tapes they swiped, so they could have movie night with their girl friends, are "Killer Punch," featuring a cruel puppeteer using his craft to torment his family; "Scream House," about a young couple living in a house haunted by the spectre of a deranged killer; and "Garden of Blood," a chronicle of two hapless gardeners assigned to tend a haunted yard. ~ Sandra Brennan, Rovi

There are no critic reviews yet for Screamtime. Keep checking Rotten Tomatoes for updates!

There are no featured audience reviews yet. Click the link below to see what others say about Screamtime!