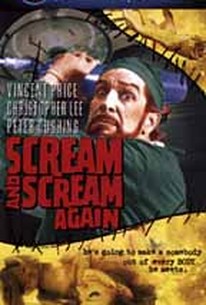 Strange and terrible things are afoot and the police are helpless to stop them in this taut, complicated thriller. First a heart attack victim goes to the hospital and awakens to find limbs missing, and later, the body of a rape victim is found with two strange puncture wounds upon her wrist. Meanwhile in Europe, a military officer is murdered by someone with inordinate strength. After another girl is murdered, Inspector Bellaver gets on the case. The trail of clues has many twists and turns and before he is led to the mysterious estate of Dr. Browning, another dies. There he discovers that the insane scientist has engineered a master race of emotionless, mindless beings as part of an international conspiracy. Now Bellaver and his cohorts must somehow stop the doctor and his friends from taking over the world. This marks one of only two features to include all three great horror actors Christopher Lee (as the head of British Intelligence), Peter Cushing (the leader of a fascist government) and Vincent Price (mad Dr. Browning) in the cast. (The second was 1983's House of Long Shadows). Interestingly, except for one brief moment at the end with Lee and Price, the actors never appear in the same scene together here. ~ Sandra Brennan, Rovi

This is another of those absurd Vincent Price horror movies, impossible to dislike because they ask only that you share their sense of the absurd. The fascinating thing about this one is that it makes absolutely no sense at all...

I hate being uncharitable about Scream and Scream Again's weak and chaotic bits because it's still just so much fun.

A movie that offered the titanic teaming of horror superstars Vincent Price, Christopher Lee and Peter Cushing should have been a classic; instead, we're saddled with this sloppy and mean-spirited endeavor.

The three biggest superstars in the horror genre are in this film.

A movie with Christopher Lee, Peter Cushing, and Vincent Price! I was so excited to see this movie, but was really disappointed by the story. The beginning is horrible, the middle is okay but sort of boring, and the end is cool but confusing. Overall not a good movie at all, but it's got a great cast who try their best.

Think about it...Vincent Price...Christopher Lee...Peter Cushing...how can you go wrong? Sadly not even watching those three (all favorites of mine) hamming it up was enough to make this mish-mash of a film enjoyable. Not that I was expecting GREAT things storywise, but I kept waiting for it all to "come together" in some sort of way. But it never really does. While I wouldn't recommend this film to any but the loyalist fans of the three gentlemen mentioned above...I can highly recommend the chessy, groovy, jazzy soundtrack - it was wonderful!

Absolute garbage...to a degree. This movie is a lot smarter than it seems. It's full of over-the-top dated 60's music and a barely coherent plot, but it's full of enough charm and star power to make it a classic.