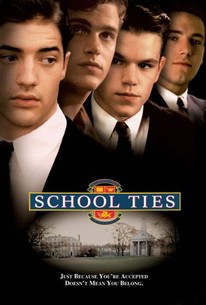 An assemblage of young Hollywood actors poised for stardom marked this tale of anti-Semitism at a 1950s prep school. Brendan Fraser stars as David Greene, a working-class Jewish quarterback from Scranton, Pennsylvania, who is offered a senior year scholarship to a prestigious New England academy. It's David's ticket to an Ivy League education and a way out of his Rust Belt hometown, but there's one condition: the school's elders ask him to be discreet about his religion. At first willing to do so, David struggles with his silence about his faith as his popularity grows. David strikes up a friendship with his roommate Chris Reece (Chris O'Donnell) and a possible romance with Sally Wheeler (Amy Locane), a student at a nearby girls' school. When jealous classmate Charlie Dillon (Matt Damon) learns David's secret at an alumni party, he exposes the school's new gridiron hero, and David faces the full force of religious intolerance from the prejudiced WASP institution. Also featuring early performances from Ben Affleck, Anthony Rapp, and Cole Hauser, School Ties was loosely based on the real-life experiences of producer Dick Wolf, creator of TV's popular series Law & Order. ~ Karl Williams, Rovi

Leon B. Stevens
as Tom Keating

Jeff Nichols (I)
as Donald

Will Lyman
as Swanson

This is a bewildering mixture of fairly accomplished storytelling, awkward contrivances in the script, and lies in the overall conception so egregious they undercut any pretensions the film might have to social seriousness.

More notable perhaps for a roster of future stars and Oscar winners than for its unexceptional plot, this well executed film nevertheless has its charms.

School Ties has a leafy, genteel look that is somehow less than convincing, perhaps because the hairdos are too tidy and the resemblances to other prep-school stories too clear.

"School Ties" seems unlikely to capture the audience that made a hit of "Dead Poets Society."

But why did the filmmakers relegate their story to the 1950s, as if such attitudes weren't still alive and dangerous?

Sure, it has a serious message, but it is put over with a grasp of reality that gives it a better-than-average chance of getting through

Stirring movie may be too heavy for some tweens.

In the real world, it's more likely that Greene's working-class background would work harder against his acceptance at a snooty prep school than his religious beliefs, but School Ties largely ignores this angle.

The boys put in fine performances but sadly the script lacks the depth of what could have been a challenging story.

an interesting coming of age film featuring a host of up and comers since turned big stars. the film deals well with the theme of prejudice, and walks the line well in portraying the pressure that many "privileged" kids are under. some of the sympathies that the writers tried to portray fell fairly flat, and the logic behind david greene doesnt hold up well enough upon scrutiny, but the major point was made effectively and the story was very engaging.

Cast: Brendan Fraser, Chris O'Donnell, Matt Damon, Randall Batinkoff, Ben Affleck, Amy Locane, Cole Hauser, Andrew Lowery, Anthony Rapp, Zeljko Ivanek, Peter Donat, Kevin Tighe, Michael Higgins, Ed Lauter, Peter McRobbie Director: Robert Mandel Summary: David Greene (Brendan Fraser), a working-class Jewish teen, receives a football scholarship to a prestigious prep school in the 1950s. But in favor of fitting in, he chooses to hide his religion from his wealthy, prejudiced classmates. Greene soon becomes the team's star player and wins the attention of a beautiful debutante (Amy Locane). But when his heritage is revealed, his schoolmates' deep-seated hatred rises to the surface. My Thoughts: "This film is a good example of how people label other people and put them into certain categories whether it be of religion, skin color, sexuality, or their nationality. This film focuses on a Jewish boy, but it speaks for everything I listed. You cannot, as they say, judge a book by it's cover. That is brilliantly shown in this film. With David withholding his religious beliefs, he is welcomed in as one of their own. But once he is outed by a fellow 'friend'(I use that term loosely), he is shunned by them all (well almost all). So instead of him being that person they had come to know him as, he was now in that labeled box of ignorance. You cannot judge a person or persons by a religion, race, nationality, sexuality, or by their appearance. They do not make up for that one person at fault. This film has great acting by all the well known actors of today. Great to go back and see them before they were such big stars. This has to be my favorite performance from Brendan Fraser. Great job by the entire cast. If you haven't seen it, then you should."

The Sad thing is that there is still that hate against Jews going around. Outstanding peformance by Brendan Fraser

In "School Ties," Brendan Fraser plays as David Greene, a Jewish football star who is attending a preparatory boarding school on a football scholarship. The majority of the people take a keen liking to him; he makes a lot of friends and falls in love with a certain girl, so his life is pretty much going along without hitting any bumps in the road. That is, until some people find out that he's Jewish and start turning against him, mainly Charlie Dillon (Matt Damon). David's life could completely fall apart, or something could happen and he could gain back respect and get back to where he was. "School Ties" was a movie that jumpstarted the careers of a few actors who are now big stars, such as Matt Damon and Brendan Fraser. The movie is interesting and it has a lot of upbeat, suspenseful drama, both good and bad during the whole movie. It's one of the best movies of its kind that I've seen, no doubt. It's a realistic movie about prejudice and it's a classic one at that. While "School Ties" has a great script, plot, and everything else it needs to succeed, what really pushes it to be the great movie that it is, is Brendan Fraser's superb acting. He does one of his best, if not his best acting job of all time in "School Ties." I really want to give this movie five stars, but I can't. The reason for that is because when the movie ends, it just leaves certain question unanswered. Other than that, this movie is top notch. NOTE: That was my Amazon review from the year 2000.