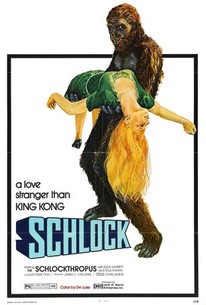 Southern California is being terrorized by a mysterious murderous monster living in a cave. As the bodies pile up -- with incriminating banana peels always near by the crime scene -- a group of teens stumble on the guilty party: a 20-million-year-old Schlockthropus, an ape-like creature with a sense of the absurd. Schlocky moves easily through a strangely stupid suburban society, the members of which don't seem to see him as a hairy menace. Young Mindy Binermen (Eliza Garrett), blind for the last three years, falls in love with him thinking he's a dog. When an operation to restore her eyesight proves successful, she discovers her pet is a lovesick gorilla being chased by the National Guard.

John Landis
as Schlock, The Schlockthropus

The humor is honest; it's not superimposed to hide weakness.

Exactly the sort of low-budget picture one would expect to be the calling card of a young kid weaned on classic movies and tattered issues of Famous Monsters of Filmland.

A monkey type monster falls inlove with a blind girl who in return thinks he is just a big dog of cause this monkey has been terrorizing the neighborhood and once he kidnaps the girl things finally go to far cause now the army is finally after him and aims to bring this bad monkey down. One of the earlier films of John Landis is also not a bad one this of course is made as a spoof and some of the jokes fall flat but its a goofy good time for anyone that wants to check it out.