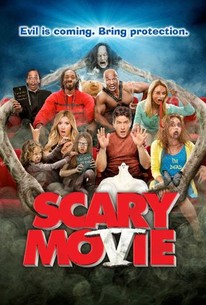 The latest installment of the slick, highly profitable parody franchise.

It's supposed to be funny, but you'd have an easier time reading a zombie's pulse than you would finding a single good laugh ...

For the art-house crowd, who may, I suppose, stumble drunk into the wrong theater after too much Chardonnay, there are nods to Black Swan and 127 Hours.

A film composed almost entirely of jokes that were much funnier when you read them on Twitter years ago.

Like so much of this whole series, the mere mention of a familiar pop culture figure or title is supposed to be hilarious.

Scary Movie 5 must be some kind of psychological experiment. Perhaps the filmmakers sat in a lab, rubbing their temples while wondering aloud how awful they could make a movie and still score at the box office.

Aforementioned media-attention malcontents Sheen and Lohan may briefly revel in the cheap frivolity of this vacuous vehicle but for others, Scary Movie 5 is nothing more than an 85-minute smirk that has nowhere to go...groundless, gross guffaws.

Every penny that "Scary Movie V" earns is cinematic blood money, looted from the pockets of unsuspecting moviegoers.

The writers are on auto pilot once more, relying on the "It's familiar, so it must be funny" routine...

Railing against Scary Movie V for diminishing the series' standards would be as effective as criticising Brooke Hogan for disgracing her proud family name. And yet, the fifth instalment of the Scary Movie franchise does do that.

Do you really wanna know how bad this movie is? "A Haunted Mansion" is comedy gold when compared to this (and that's saying something, because A Haunted Mansion was awful as well). I kid you not; this movie was really that bad. A Haunted Mansion managed to get a handful of laughs out of me (which I still feel guilty for); this movie didn't even crack a smirk on me. Do you really need to know more? We could have rented "Epic" or "Pain & Gain" (I definitely would have picked Epic), but since the majority of the kids picked this it's what we had to watch (also, my little brother liked this movie, that's all you need to know seeing that he's the guy who also likes Epic Movie & Grown Ups). I sat through every agonizing minute of this film, & I asked myself "WHY?!" with every random "gag" that was thrown at us (which was every 15-25 seconds) & not once did I even show the slightest hint of a smirk. It was painful to sit through. How painful? Epic Movie painful! I can't even properly think how I can write down what I went through sitting through this crap! It's just BAD. BAD! I seriously didn't think that a Scary Movie movie could have stooped down to the level of a Seltzer & Friedberg movie. There are numerous pacing problems, terrible acting (even for what it was going for), jokes that are nothing more than pop culture gags that were clearly done in reference from Seltzer & Friedberg films, tons of inconsistencies, lack of logic or even brains, & some of the most awful casting choices I have ever seen (Ashley Tisdale? Seriously?) Also, RT, ask your editors to check the damn page here, the cast listed has actors that were never present throughout any of the movie.

Scary Movie 5 - This may be one of the worst spoof movies I have ever seen! It takes everything that was ever good or just decent about the other "Scary Movie" films and breaks the back of the franchise. It is dead dead dead. Hardly a laugh comes from this film at all. I will say that it is more clever than the hideous "30 Nights of Paranormal Activity with the Devil Inside the Girl with the Dragon Tattoo" that came out earlier this year and attempted to make you laugh. I've seen worse films, but this is one of the worst this year by far. It's unfunny, crude, rude, and completely ridiculous. "Scary Movie 5" is not quite as bad as I think the second film is, but there is nothing good about this film besides a few gags here and there that made me chuckle and save me from killing myself out of boredom. This is a terrible film!

Evil is coming. Bring protection. Very weak comedy movie! The worst of the Scary Movie franchise. The era of spoof and parody is dead. Let me start off by saying that I knew this film was going to be horrible from the start. I had read reviews and knew it was bad, but being so infatuated with film and theater, I actually wanted to see the movie to diagnose exactly what made it so horrible. Admittedly, there were some very rare parts of the movie that had a somewhat witty humor to it, but it was only once or twice, and weak at that. The rest of the stupid slapstick humor was just so lame and dragging. Overall, there was almost no sophisticated or witty humor, horrid acting, and it was all just plain bad. So yes, the reviews are correct, it was horrible. Don't waste your time! Happily-married couple Dan and Jody begin to notice some bizarre activity once they bring their newborn baby Aiden home from the hospital. But when the chaos expands into Jody's job as a ballet dancer and Dan's career as an Ape researcher, they realize their family is being stalked by a nefarious demon. Together, with the advice of certified experts and the aid of numerous cameras, they must figure out how to get rid of it before it's too late.

The spoof genre is officially buried. We can confirm that now. That the end was nigh, we knew already six years ago when Jason Friedberg and Aaron Seltzer went to the john and squeezed out the abomination known as Epic Movie. Which they proudly patted each other on the back over, packaged and shipped out to the misery of audiences everywhere. I myself saw it with my younger brother - he contracted something akin to a stomach ulcer long before the end credits rolled. The Scary Movie series, on the other hand, has been what you'd call a guilty pleasure of mine. Jejune and IQ-depraved, no argument there, but at least I got some good laughs out of it, even from the franchise's fourth and then-weakest installment. Film number five starts off fairly decent with an adequately amusing Benny Hill send-up performed by the poster children of all Hollywood scandals: Lindsay Lohan and Charlie Sheen. A quick-n-easy paycheck for them both, which we can only assume they have snorted away by now. The few chuckle-worthy jests at the film's disposal are exhausted before we even get halfway. The rest is exclusively devoted to such tasteful antics as - brace yourselves - toilet humor, fat jokes, groin kicks, slapstick and Heather Locklear repulsively giving birth on stage during a performance of the ballet classic "Swan Lake". Whew! And blergh... A combination of Mama and Paranormal Activity has served as a basis for the plot, although any mention of story is in this case quite irrelevant. Everything between Inception to Evil Dead has become a target for ridicule, which sounds fun on paper, but the potential and many celebrity cameos of which are utterly squandered. If, despite my warnings, your cravings for a dose of unrestrained humor won't let itself be suppressed, rather dust off your DVD collection and introduce your teenagers to great classics like Airplane! and The Naked Gun series. Or why not Hot Shots 2, now that we have Charlie Sheen fresh in subject. Any and all are a more preferable option than writhing and suffering in front of this appendicitis of a parody. Rest in peace, thou once enjoyable genre. http://www.facebook.com/pages/Mikes-Movie-Reviews/281824101875153?ref=hl