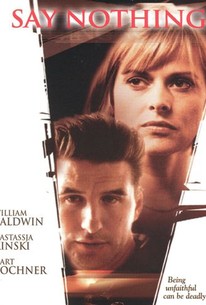 A woman discovers a casual affair may have led both her and her husband into dangerous territory in this thriller. Claire and Ed Needham (Nastassja Kinski and Hart Bochner) are a married couple whose relationship has been going through some difficult changes; Ed has lost his job, and his depression has led to a problem with alcohol. Claire takes a vacation alone, where she meets Julian (William Baldwin), a handsome and strongly persuasive stranger. Claire has a brief affair with Julian, but she soon finds herself feeling guilty about her infidelity and returns home determined to make a fresh start in her marriage. Claire comes home to the good news that Ed has found a new job, but Claire's hope turns to shock and suspicion when she meets Ed's new boss -- Julian.

Danny Lima
as Goon
View All

Critic Reviews for Say Nothing

Combines the familiar themes of infidelity and a psycho stalker pretty effectively, but it's the all-important 'whys' that are missing.

The first indication that you're watching a film impossible to be taken seriously is that William Baldwin gets top billing.

No sense of mystery, danger, or intrigue.

There are no featured reviews for Say Nothing at this time.