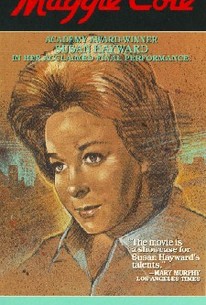 In her final acting appearance, Susan Hayward is ironically cast as a research doctor who can no longer face up to the notion of dealing with death on a daily basis. Recently widowed, Dr. Maggie Cole is on the verge of giving up her job and going into seclusion. She is shaken back to reality by crusty but lovable "street doctor" Lou Grazzo (Darren McGavin), who coerces Maggie into accepting a job at a Chicago slum clinic. At first adjusting admirably to her new surroundings, Maggie undergoes a devastating assault to her emotions when she befriends a teenaged leukemia patient. Written by real-life M.D. Sandor Stern and originally telecast by ABC on September 27, 1972, Say Goodbye, Maggie Cole was supposed to have been the pilot for a weekly series, but plans for this project were abandoned after the death of star Susan Hayward.

Scott Edmonds
as Barney
View All

There are no critic reviews yet for Say Goodbye, Maggie Cole. Keep checking Rotten Tomatoes for updates!

High class TV movie that served as Susan Hayward's swan song. She gives a strong performance in the title role as a doctor rebuilding her life in an inner city clinic after her husband's sudden death. Darren McGavin is a great sparring partner for her as the other doctor, both flinty and tough individuals who spark each other. Jeanette Nolan will break your heart in her big scene. Worth seeking out.